Write Bites Episode #18: What Freelancers Should Know About GPT-3 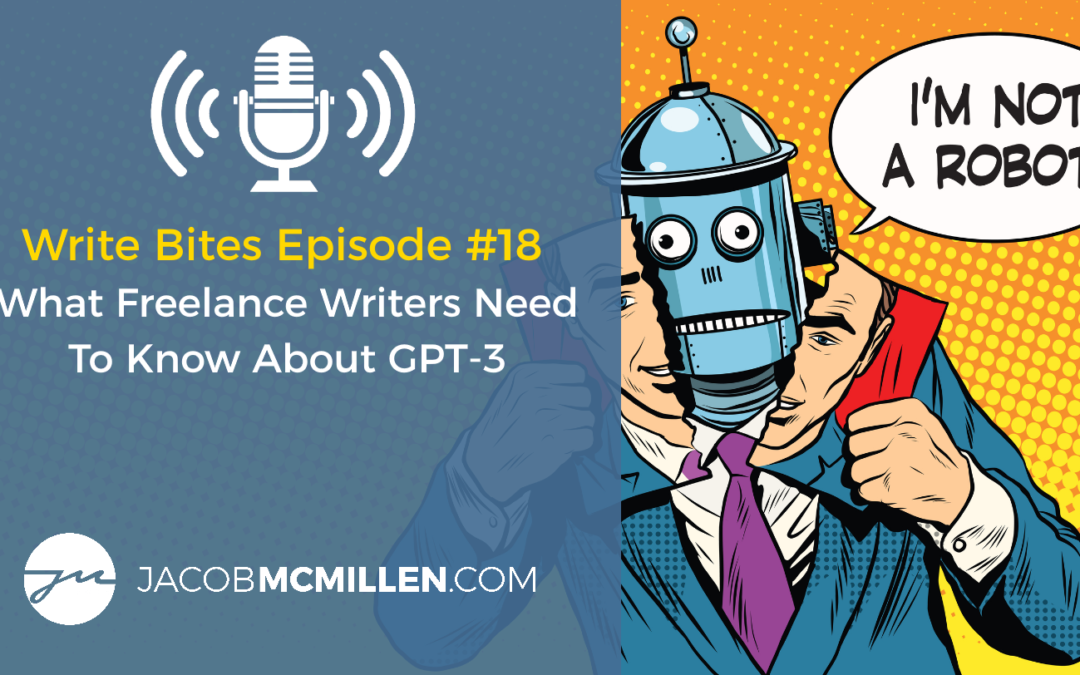 In Episode #18, we discuss what freelance writers need to know about GPT-3, a revolutionary new machine learning algorithm that’s here to help?

Read The Transcript: What Freelancers Need To Know About GPT-3

Welcome to Write Bites, an audio series where we discuss writing, marketing, and freelancing during one of my daily walks around the neighborhood.
Today I am not walking around the neighborhood because it is raining ash here in Redding, California due to the surrounding, fires. This is not the first time and I imagine it will not be the last, but we are, ashed and smoked out, forced indoors for the foreseeable future.

I’m going to make the best of it by recording a video and audio segment here in my office. If you are listening to the audio now and want to catch the video, you can find that on my YouTube channel.

In this episode, we are going to talk about, GPT-3. It’s a new AI program, a machine learning program that is generating text and writing that some say, the research shows, is indistinguishable from a human author. By that, I mean they sat down a bunch of people, showed them 200-word articles generated by a GPT-3 mixed in with articles written by humans, and the readers were only able to guess which was which correctly 52% of the time—50/50, AKA—virtually indistinguishable.

So, in this episode, I want to dive into what GPT-3 is, explain why it’s not coming for your job probably, and also give you some ideas about how it can actually help you as a writer and help you deliver work for your clients.

So, diving in: GPT-3 is, as I mentioned before, an AI program, a machine learning program that’s all about language generation. It’s gone through a huge chunk of the internet, a huge chunk of available written resources.

It is way ahead of the previous competition in terms of generating language that feels like it’s written by a real person. This step from “maybe, sorta, coulda” been a bad human writer, to “that actually seems like it was written by a decent human writer” is a huge step.

What we can see in looking at GPT-3 is that it is devoid of all those critical pieces that make up worthwhile writing.

I’m pulling a little bit here from a deep dive that the Animals blog did in testing this out. I was already thinking about what I wanted to say on this tool, and then they released a very in-depth piece where they spent some time trying to create good writing using the GPT-3 API and the insights that came with that.

I would highly recommend reading that. I’ve included a link on my website and on the YouTube channel. But summarizing from that, one of the pieces that they mentioned, which I had not thought of previously, was the “arguments with evidence” bit. This is an area that I think, down the road, AI will be able to handle. Ultimately, what do we do when we want to support our arguments as writers? We go out and we find evidence that supports what we’re trying to say.

We look for case studies. We look for data. Maybe we look for expert opinions. Whatever it is, it’s not a creative process. It’s a research process. And that’s why I think at some point, I actually was expecting that GPT-3 would knock this out the park, but it can’t. What it tends to you do is just generate a language and opinions based on its algorithm.

It generates an opinion, a claim, a topic, but then it doesn’t bother with supporting it, at least according to the Animals blog research. I do think at some point down the road, further iterations of this AI specifically, or maybe, the next, new branded version that comes out will be able to handle this piece.

And when it does, I think it will turn into literally a must-use tool for writers because that is always the most time-consuming part of good writing, at least for me, and from what I can tell, that’s true for a lot of other content marketers. The tough part is going out and finding the examples, finding the case studies, finding the data.

We tend to come across a lot of this stuff throughout our day-to-day. But then when we want to go back and reference it in the articles we’re writing, it can be very time-consuming to go find it.

And so having an AI that is literally out there consuming this online information constantly and can then help you immediately find that and reference that in your content—that would be one of the coolest tools I could possibly imagine as a writer.

But as I said, it cannot do that. And it also cannot do the two pieces which I don’t think AI will ever really be able to do—at least not until we’re in true, super AI territory, in which case writing is the least of our concerns or aspirations.

Those two pieces AI cannot do:

It cannot build a narrative, especially a long-form narrative.

GPT-3 cannot take a prompt and turn it into a structured sequence of content that is intended to take you from A to B in your thinking, intended to tell a connected story over a long segment of writing.

And that is honestly what makes long form so difficult to write—even as a human—and so lucrative. Lucrative is kind of the function of the difficulty in the sense that you need that long form capacity to really stand out in this day and age—with as much content as there is out there—and not many writers can do it. Even experienced writers struggle to do compelling long form that keeps you on the page and keeps you reading.

And GPT-3 isn’t even close.

Again, this might be something that AIs develop over time, where they can identify patterns of ideas or angles of ideas from other content and insert them into a narrative. But again, insight is very connected to narrative in the sense that you are building the structured argument and presentation and journey, and then you are providing key insights.

As humans, we often provide the best insights based on experience. That experiential application is not something that AI can currently emulate. And who knows if it will ever be able to in the future?

So that’s why GPT-3 falls short of the freelance writer killer—if you are a good writer who provides a narrative insight and arguments with evidence in your writing.

Obviously, if you are a very poor writer who is just taking on jobs that you know are intended for nonhuman audiences— maybe you have some clients that have somehow made it to 2020 using the old-school model of keyword packing and the old-school SEO model of content not designed for a real reader—if that is making up your client base, then … this could replace that. But that type of writing has not been effective for nearly a decade. So, I really don’t think any writers currently out there are paying their bills off that.

Unless your writing lacks narrative, lacks insight, and lacks arguments with supporting evidence—which in my opinion are the key ingredients of great writing—you’re good to go. You don’t need to worry.

Real quick moving past that, how can GPT-3 actually help you as a writer?

This is where it’s kind of interesting. I think there’s going to be a lot of experimentation on this moving forward, but looking at some people who have been playing around with it and what they’ve been able to come up with, it’s great at generating new ideas.

For example, if you are exploring a topic, it doesn’t cost you anything to throw a nice targeted prompt into the GPT-3 API and have it spit out a few hundred words. If you let it have more liberty in terms of a wider range of output, then it can potentially generate some interesting, new ideas that you wouldn’t have considered in covering that topic.

That’s a way it can help. In a similar vein, it can help you approach things from new angles. One thing I’m really personally interested in experimenting with it on is phraseology. I tend to be very repetitive in my phrasing, both in terms of how I speak and and how I write. I think using it in short bursts to help me generate some alternative phrasing for certain pieces of my writing could be really interesting.

Perhaps most importantly, if you have a situation or a project where you need to generate additional text without a real narrative purpose, I think it could generate some good content.

For instance, from an SEO standpoint, we talk about some of these types of content that are intended to be read, but not really. And by that, I mean like your recipes, where you have a thousand-word, personal story from the author that you don’t care about, but they need to pad it out. Otherwise they’re not going to rank for the recipe.

Or if you’re looking up some sort of data-based content where you’re looking to compare and contrast two things, and it’s not enough for them to just give you the data, they also need more content in there to rank. Within the context of real insight and narrative pieces, you could pad it out with this type of writing.

There are some other ideas as well. This Friday in our Write Bites Club episode, I’m going to dive into some specific business models that I’m thinking about experimenting with using GPT-3 stuff that would’ve cost a few thousand dollars a month to try previously.

Once I’m able to get access to this tool, it’s something I’d like to try that could potentially take it from a $2-3,000 a month business plan to a—whatever the cost of the API is—maybe a $50 or a $100 per month business plan. And, you know, we can try it out and see what happens.

So there are a few business models I’ve been thinking about. We’ll talk about this Friday on the Write Bites Club episode. If you aren’t in Write Bites Club, there’s a link in this article or video, depending on where you’re watching it, to sign up. We’d love to have you.

I will see you guys on Friday.

That about wraps up everything I had to say on GPT-3.

If you have any questions, feel free to leave them in the comments. And I will catch you guys either this Friday or next week, for sure, the following episode.

In this Friday’s club exclusive, I’ll break down several business models I’m planning on experimenting with using GPT-3 as the primary engine. These are projects I’ve held off on due to projected $2,000-$4,000 per month costs, but with GPT-3, I think I could execute them for just the cost of the program license, and I’ll break it down in-depth in Friday’s episode.