Writes Bites Episode #20: Why The Freelance Business Model Has Taken Over The World 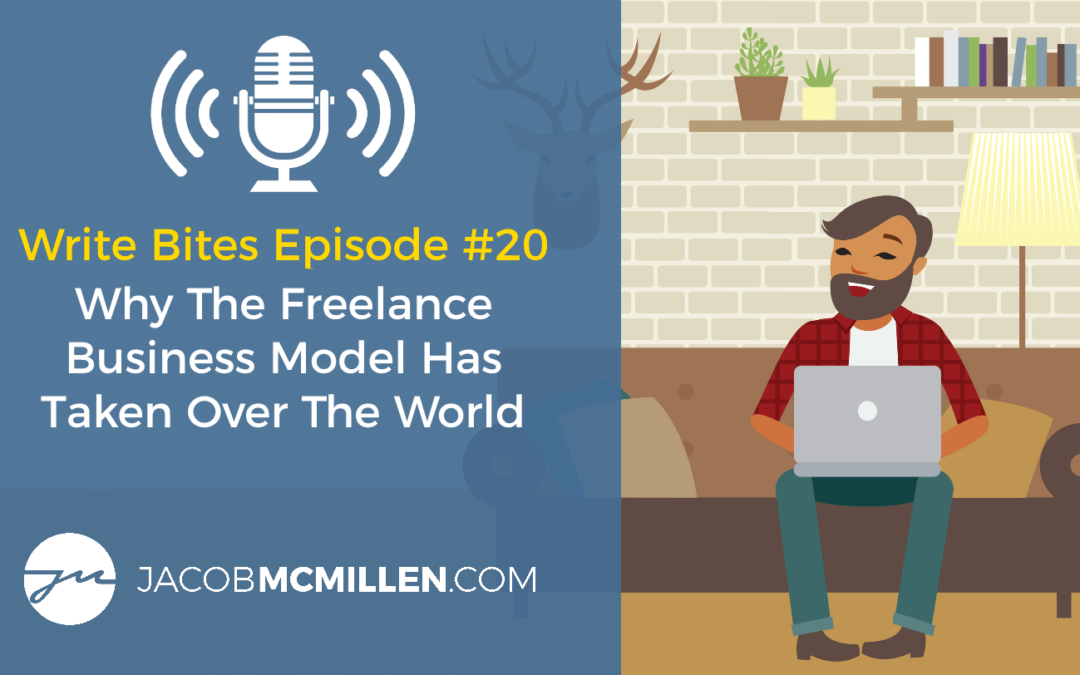 In Episode #20, we dive into why the freelance business model has taken over the world. I think understanding how it works will help you better understand how to work it (ba dumb shhhh).

Read The Transcript: Why Freelancing Has Taken Over The World

As you can see, I am not walking around the neighborhood because it is still a bit smokey, and I’m not quite ready to resume my walks. Waiting for the air quality to get just a bit better.

So, I am recording this in the office, and the topic I want to discuss today is the freelance business model:

Why is it so lucrative? Why is it such a superior option that has completely changed the landscape of clients and business owners alike over the last 10 years relative to the previous model?

I wanted to dive into this because I noticed that a lot of questions that come up on freelancing, and more specifically freelance writing, really stemmed from people not understanding how businesses work in the first place and the advantages that freelancing provides, if you are approaching it correctly.

So, to go back to the beginning, let’s talk about how businesses worked before the internet changed things and made people more accessible. Let’s continue with the writing business model and talk about what the previous version of a writing business looked like. It’s going to apply to many other business models as well, but the direct comparison will make it a bit easier to wrap your head around it.

Previously, if you wanted to offer writing as a service, what did you do? You went and got hired by a writing firm or some sort of firm that heavily utilized writers.

Picture the traditional idea of the mad men style advertising where most of the people are either falling in the category of the visual creative or the copywriter. The same was true for pretty much any other form of direct sales writing, freelance-style writing, or copywriting that was going to be used in the business sense.

If you wanted to work on projects like that, you went and got hired by a firm. That’s what you did. Why did the firms have the writing jobs to offer? Why were they the only game in town? Because they were the ones who were out selling this service to other businesses.

In a firm, there was a full-time sales team at work. Depending on how the firm was arranged, you might have the upper-level copywriting partners who worked their way through the firm. They then become the leads on going out and securing business by connecting with other people who are at the top of their firms and saying, “Hey, you know, we’re going to  have a $500 meal together. And then, at the end, you give your firm’s business to my firm and we do the work for you.”

That’s basically how it worked. And there were different scales of that. You had smaller firms, you had bigger firms, you had firms in-between. But that’s how it worked. You had a sales department that secured the business or upper-level partners, the upper-level executives, who are the ones networking with executives from other companies to secure some of those bigger contracts.

Now let’s look at how that worked from the side of someone who needs copywriting for their business.

Let’s say I am the business owner of Ogilvy. I’m selling a cleaning product that helps people to clean their carpets, clean their clothes, whatever. It helps get stains out—a stain remover. I want to get this product out and in front of people. I want to do a creative that’s going to generate demand for my product.

In the pre-internet era, you would go talk with an advertising firm and say, “Hey, I’m looking to give my business to someone for advertising.” And then, you would pay a very high rate to this firm to secure their services.

What’s actually happening when you hire that firm and pay that big fat salary is that your money is being distributed across multiple layers of the firm’s costs. You have the amount that’s going to the partner that you contacted or the sales exec that you contacted to get their business; they get their sales commission; other amounts are being taken out to pay administrative costs; there are advertising costs on the part of the firm that are trying to get in front of you to make you think of their name when you’re ready to hire an advertising company. It’s expensive to run a firm. A lot of these firms are located in downtown Manhattan spending loads on real estate or rent.

At the end of the day, who’s actually writing your campaign?

It’s probably a lower-level copyrighter who’s making $50-60k a year; they’re like living in New York where it’s more expensive. If they have a branch that they send it out to that’s in Nebraska, then maybe that copywriter’s making $40k a year.

In many cases, if you’re not really paying up for the VIP package, you get a low-level, entry-level copywriter—someone who’s maybe been doing it for two to three years—who’s actually doing the writing for your campaign, but you’re paying this massive paycheck to this firm. That’s really just about covering that firms’ expenses and all the people that they need to pay.

That makes the costs so prohibitive that most companies can’t afford to work with these types of companies. So, most companies weren’t actually participating in these big, national advertising campaigns. Instead, they were paying a much lower rate to the local radio station to do a quick little ad. But even then, to get the writing for the ad, maybe they’re paying the radio station to write the ad for them or they’re hiring a smaller, local advertising or writing firm, again, with the same margins being taken out, just on a smaller scale.

Basically, the cost of what you were paying to get any form of copywriting for your business were magnified— they were unnecessarily large.

What the internet did was make it easy for people to start reaching out and connecting to all sorts of talent without all the gatekeeping. 20 years ago, if you wanted to find a copywriter, where were you going to find the copywriter? Pretty much only through these copywriting firms. You couldn’t just go out and find a copywriter somewhere. There wasn’t enough freelance demand for people to be able to sit around and find this type of work.

What does that mean for businesses today? Why would they rather go through a freelancer than our firm? Well, the answer is that when you’re comparing the firm versus the freelancer, instead of paying $50,000 for a second-year copywriter to do your work for you,  $40-45,000 of that is going to the company and only about $5,000 of that actually makes it into the writer’s salary.

You can go hire a second-year freelancer and just pay the five grand. So you’re getting essentially the same work for $45,000 less. And those are just arbitrary numbers, but when we talk about scale, it really is that big of a difference. The same concept  applies, especially in recessions or uncertain economic times, when companies are evaluating writing needs and how to supply them: the cost to hire  freelancers is drastically lower than to have full-time staff assigned to that writing.

Even when we talk about a full-time staff who maybe ultimately is making less than the freelancer is making, people really underestimate the costs of finding, hiring, and maintaining a full-time staff member. So even if we’re talking about someone who has a relatively low salary versus a highly paid freelancer, at the end of the day, the costs usually end up being less to pay the really high-cost freelancer compared to having the full-time staff on board.

And if you can nurture the writer’s productivity and talent to a certain point, eventually it does become the better play in the long term. But when we’re talking about the short term—six months to a year—it’s almost always going to be cheaper to work with a freelancer. And so that’s why we actually see demand for freelance writers go up during recessions and uncertain economic times.

I just wanted to quickly go through the before and after so you could get a feel for why it’s so easy to provide a better value to companies as freelancers and why the freelance writing market right has just absolutely exploded due to the rise  of internet-driven commerce, in particular, e-commerce, in the last 10 years.

In 2010, the eCommerce sales eCommerce sales were 170 billion. In 2019, they jumped up to 600 billion and we’re on we’re on pace to hit 1.2 trillion this year. So that’s a 600% increase in 10 years. These sales are almost all driven through copywriting. Copywriting is instrumental in literally every form of online sales campaign today in 2020.

This explosive growth is relying on this freelance writing talent. To a certain extent, over the last few years, more and more of that was brought in house. However, you still have a lot of companies where they’re not ready to bring it in house and, over the next year or two—especially if we end up going to somewhat of a sustained recession or even a temporary recession—you’re going to see more and more companies that had started  putting their writing to full-timers now switching back over to freelance because of the lower cost.

Another freelance service that has similarly benefited from this dynamic is that of consulting. Over the years, I’ve evolved my writing and copywriting offer into a dual part consulting and writing offer. Ultimately, I’ve leveraged this mostly into just charging higher for my writing and making it part of the value delivered in offering a higher-ticket writing service. But I’ve also taken it in other directions, using it to sell and upsell other offers. Overall, when you bake in the consulting side of things, you tend to be able to charge more across the board.

I hope that was helpful, and I will catch you guys in the next episode.

In this Friday’s club exclusive, I’ll show you how I’ve been able to create a dual copywriting & consulting offer that allows me to make more money across the board. If you are wanting to offer high ticket writing services, you don’t want to miss this episode.