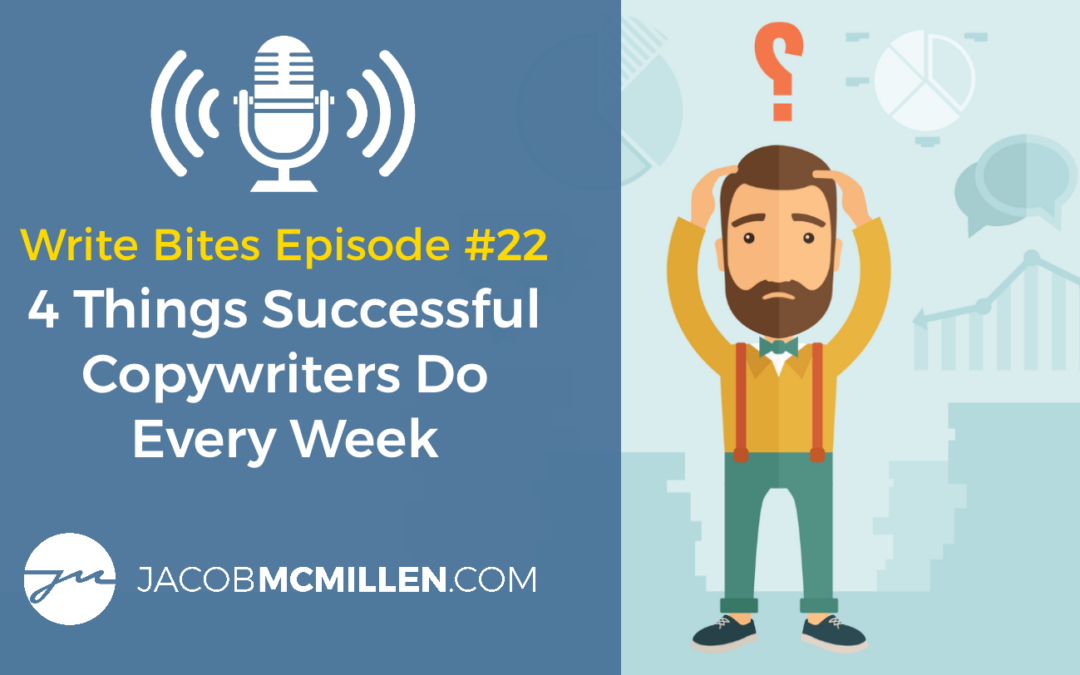 In Episode #22, I break down the four things that successful copywriters do on a weekly and even daily basis.

In this episode, we’re going to be talking about what a copywriter actually does. We’ll go through four things that tend to take up the vast majority of a copywriter’s time on a day-to-day and week-to-week basis.

If you’re looking to get into this field and would prefer to start with an in-house position, I totally endorse that. There are not a lot of downsides to getting paid to be trained. So if you’re not necessarily looking for the benefits and the freedom of freelancing—you just want to get rolling on this career in the quickest way possible—grabbing an entry-level position is a very viable option.

The one thing I would add is that you are going to discover, fairly quickly—and by that, I mean probably within your first year—that you are getting drastically underpaid.

As an in-house writer who is writing full-time, once you get to the point where you’re feeling pretty confident in your work—which if you’re writing full-time is probably going to be around the six to nine month mark—you’re going to immediately look over at people doing half the work, half the actual volume of writing that you’re doing, and see that they’re making more than you.

Those people are freelancers, and so you’re probably very quickly going to be tempted to get out and go the freelance route, assuming you actually want to take on the additional challenges of bringing in your own clientele. So, just something to keep in mind.

Now, getting past that, going into what freelance copywriters do, there are four main things that are going to occupy your time on a day-to-day and week-to-week basis. These are:

2. Pitching new clients: if you are a successful freelance copywriter, you will be spending a significant portion of your time pitching every single week. The mantra that I hammer into my students over and over and over is: 20 pictures per week, 20 pitches per week, 20 pitches per week. It doesn’t matter if you have no clients; it doesn’t matter if you have more clients than you want. Increased demand is always a good thing; it’s going to allow you to be even more selective and raise your rates.  Ultimately, that’s when you want to raise your rates—when you are getting more demand than you can handle. So even if you have as much demand as you want, continue pitching. Continue generating that demand.

3. Managing your existing clients: this can go anywhere from ‘barely a thought’ to ‘an absolute time-draining pain.’

4. Marketing your brand: you don’t necessarily need to spend as much time on marketing in your first year to maybe three years.  Pitching is your short-term growth mechanism, but over time, you’re going to want to start adding in some marketing to start generating some inbound demand, which we’ll talk about here in a second.

So, let’s dive more into each one of those.

What does it look like for a copywriter to write copy—in its most basic form? It looks exactly like you sitting down and writing for an essay in high school or college, even sitting on in writing an email. There’s no magic secret process that copywriters do. We just sit down and write.

Blog writing is a bit unique. In a past episode, I talked about the difference between content writing—which incorporates blog posts—and copywriting. We’re talking shades of gray here. They’re very connected, but you do take a slightly different approach for blog writing.

In general, when we’re not talking about blog writing specifically, the way you approach all copywriting is more or less the same, you just have different goals, different contexts, and different audiences that you’re trying to work with.

Essentially, you’re sitting down in whatever your preferred word processing app is—in my case, it’s Google Docs—and you’re just writing. You’re thinking through what you want to accomplish with the piece, and you write it. That’ll take up—depending on where you’re at in your career—anywhere from two hours of your day to eight hours of your day.

Earlier in your career, you’re probably charging a good bit less; you should be at first, because you’re not as good. You want to be getting as much experience as you can get. So, you want to be taking on a full schedule of actual writing work that’s going to pay pretty well by virtue of the volume that you’re doing. That’s going to give you a lot of experience.

For example, say you wanted to hit six figures, which is like 275 bucks a day. You may need to write two assignments. If you’re making $100 a blog post, you may need to write three blog posts a day to hit that. If you’re someone like myself who’s been doing this for eight years and charges $1500 for a single blog post, I could write one or two a week—whatever the math adds up to—and I’d hit that daily dollar goal that way, versus needing to write three blog posts a day.

How much time you’ll spend writing depends on where you’re at in your career.

So, why do people like me get these incredible results writing for several years and then start making products and selling and trying other business models? Because at the end of the day, you can’t write for eight hours a day for 10 years in a row and not get a little sick of it. We’re all multi-faceted people, and no matter how much we can write in a certain season of our lives, at a certain point, you start wanting to vary things up.

That’ll change over the course of your career, but for the most part, you’re going to spend a good amount of time writing. And the second thing?

You absolutely have to be pitching on a weekly basis at a minimum—if not a daily basis—to create an initial pipeline of leads and clients and to maintain it. One of the reasons that the idea of feast and famine of a rollercoaster in freelancing is so prevalent is because people do not do this. They don’t maintain their pitch volume.

Even people who can motivate themselves to get out and pitch, do it for a while until they start hitting income numbers that relieve the feeling of having a fire under their butts. They get to that point, and then—they stop pitching. Then two months later, the client load starts to drop off. Then they start pitching, and it takes two to four weeks for the effect of their pitching to come into full force.

That’s where the yo-yo comes in, up and down, up and down. There’s no stability to their income that way, whereas if they were to stay pitching, even after they have as many clients as they need, they would continue to scale their income.

Pitching, if you’re not familiar, is essentially just reaching out to businesses. It could be any businesses, or it could be specifically businesses in the niche that you’ve chosen as a writer. Good pitches are under 100 words. There’s not a whole lot to them. You’re just being very specific in what you’re offering. You’re not looking to persuade people, you’re just looking to get in the front of those people who know they need writing.

So, pitching should be the second thing happening on a day-to-day or at least a week-to-week basis. It’s what you should be doing if you want to be a successful copywriter. Moving on to number three.

Again, this can take anywhere from a very small amount of time—some clients are just really easy to work with—to taking a lot of time with very demanding clients who are constantly taking issue with things. Or, maybe they’re great clients, but they’re just a little hyperactive in terms of the feedback they want from you. Managing clients is just part of the deal.

It’s another reason that even successful service providers at some point like to start varying how they use their time; it’s why we branch out and try other pursuits. Client management and customer service is draining. There’s no way around that. Even with good clients, it can be draining. It’s just something you have to accept and do your best with. You’re going to interact with a lot of really awesome people who encourage and make you feel great about what you’re doing, and you’ll deal with clients who make you second guess whether this is for you. You deal with it.

What we’re talking about here is the long-term building of an inbound leads channel. Inbound means people are coming to you rather than you going out and getting in front of them.

I used SEO for that. You can also use LinkedIn or high-volume guest blogging. You could even do paid advertising. That’s one of those that theoretically works, however, I don’t know any copywriters who say, “Hey, I’m getting all my leads through paid ads.” I’ve talked with a few who run ads and it supplements what they’re doing, and so you could use it possibly on that end.

Most of the people I know who really figure out paid ads just end up becoming paid ad service providers—that becomes their service. If you are someone who has an interest in paid advertising, I would never discourage you from pursuing that interest. It’s one of the more lucrative services you can offer that incorporates copywriting.

If you’re wanting to build your own successful copywriting business, both in the short term and the long term, those are the four things you should be doing to some extent. I hope you found that helpful and I will catch you in the next episode.