Write Bites Episode #9: How To Break Up With A Client 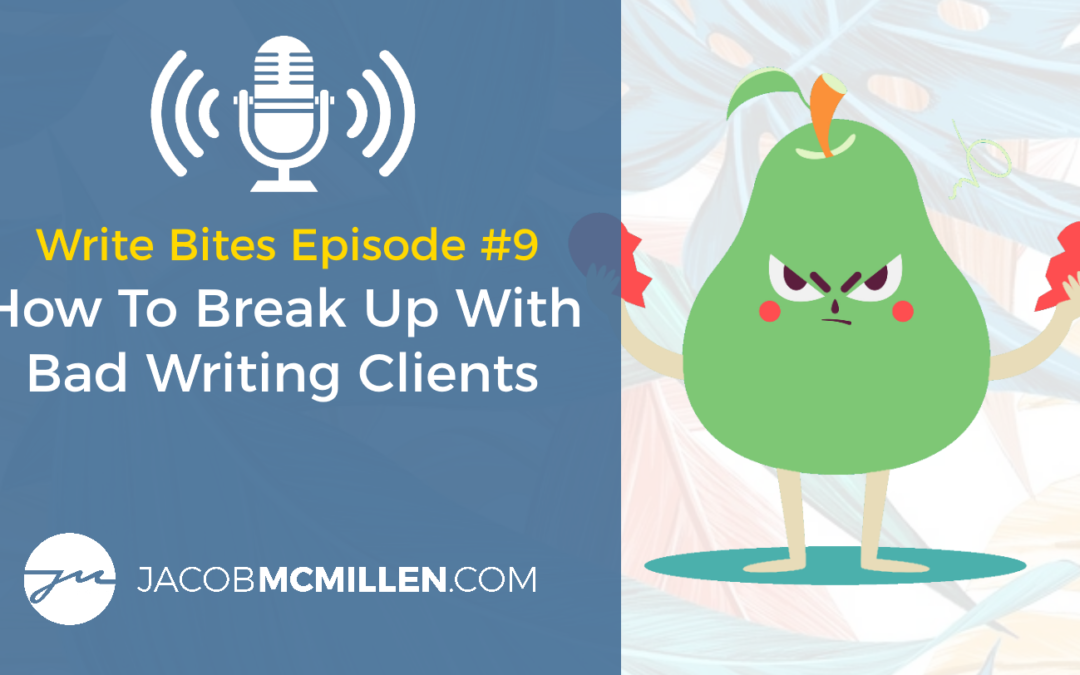 In Episode #9, I explain how to break up with a bad copywriting client.

Transcript: How To Break Up With A Client

Hey guys. Welcome to Write Bites, an audio series where we discuss writing, marketing and freelancing during one of my daily walks around the neighborhood.

The first thing I would say here is:

You need to know exactly why you’re breaking up with the client.

Never let any decision be made based on a vague feeling about something. You need to really isolate the specific reason you’re wanting to take an action.

When we talk about “How do I break up with client?” let’s first ask, “Why do I want to break up with this client?” The two biggest answers are usually going to be either:

They aren’t paying enough, i.e. the pay is too low.
You are unhappy with something related to how the client/freelancer interaction is going. Maybe they’re not paying on time, maybe they’re vague, maybe they require way too many revisions—stuff like that.

Just let them know, “Hey, my rates have gone up since the time we began working together. Starting at X date in the future (maybe at the end of the month) I’m no longer going to be able to continue working at the previous rate. I’d love to keep working with you, but if you’d like to continue, it’ll need to be at this new rate”

That gives you a chance to retain the client and also suggest to them that your demand is going up—that a lot of other people are liking what you do. And if the client really likes your work and understands how much of a pain in the ass it’s going to be for them to have to go replace you with someone else, then there’s a very good chance they’ll raise your rate. It happens a lot more frequently than a lot of freelancers would expect.

Now, let’s say it’s not a pay thing. Let’s say it’s related to the relationship. We had someone in Write Minds mentioning today that their client is always way overdue on payments. Someone else on one of our office-hours calls mentioned that the client will frequently give unnecessarily harsh and mean-spirited critique on their work, and it’s just very discouraging and causes doubts, and causes them to question their writing ability, and it’s just ongoing and it’s unnecessary; it’s not just normal critique. Stuff like that.

It could be any number of things. Maybe it’s just something as simple as they have really strict editing processes and you’re kind of just getting to the point where you’re sort of over it. I’ve had that happen at times in the past as well. So, if it’s anything like that, then what you want to do is ask yourself, “Does it make sense to address the specific scenario?”

For example, “Does it make sense to communicate, ‘Hey, I’m not going to continue work until you pay my invoices on time.” If it’s something like that, then it’s relatively simple to just say, “Hey, you’re overdue and I can’t continue working until you make up the payment.”

If it’s something that’s a little more personnel-based like the harsh feedback one, if you want to keep the client, you can just confront them with, “Hey, this thing here is unnecessary, and I don’t appreciate it.” And potentially it can be resolved.

The other way you can approach it is to ask, “Is there a price point where I’m willing to deal with this stuff?” Then you can take the same approach as the rate raising. You say, “Here’s my rates moving forward. If you don’t like it, fine.” Obviously, you’re not phrasing it exactly that way, but that’s essentially the gist of it. Either they pay you enough for it to be worth it to you to deal with their shit, or they don’t. And then you move on.

I would say if you have a set retainer, if they are pre-paying you for a set amount of work or a set amount of hours that you have pre-committed to by virtue of them pre-paying you—so there’s basically a shared level of commitment to each other—then yes. Obviously, you’re going to need to honor the remainder of any given period. You just want to let them know, ideally, early in the period that, “Hey, at the end of this period, here’s what’s gonna happen.”

If that’s not the case—if there is no work committed to you, if they’re the type of client that just randomly assigns you stuff when it pops up—there is no obligation on your end to offer any sort of two weeks’ notice or anything like that. They haven’t made any sort of commitment to you, and there’s no obligation for there to be commitment from your end.

You don’t want to burn bridges. You want to be polite in your communication. You want to be as ‘in advance’ as you can tell people. If you can give a later date, then do it. But if you can’t, then don’t worry about it.

You have to understand that the role of a freelancer and the hiring of freelancers is extremely advantageous to businesses. That’s the reason it’s become such a big thing. That’s the reason the freelance market is as big as it is. They forego a ton of expenses by working with you versus hiring someone directly.

A lot of people don’t realize that benefits packages are usually worth about 33% of the salary you’re being paid. Just by virtue of using a freelancer, they’re cutting 30% right off the top. On top of that, they’re not making any sort of commitment to you in most cases.

It’s like this:
you’re there to buffer their own poor planning or the pieces of their business model that are variable
you’re there to function as emergency labor or variably placed labor

Instead of having to deal with bigger fixed costs than necessary, they have variable costs that can scale up and down with their variable revenue.

All that to say: You don’t need as a freelancer to be worried about how you’re impacting their business model. Let them worry about that.

It’s kind of in the same vein of when people are super worried about the results of their copy in a simple, one draft hiring scenario. Worrying about ultimate business growth is the role of a founder or a VP of Growth. That’s a level of responsibility that comes with a $100k+ price tag.

So don’t be embracing all that; don’t be bending over backward to try to help these businesses as if you owe them something: you don’t.

When someone hires you, it’s because they think they can make more money off what you’re doing, than you can, essentially. That’s how all employment and hiring works. It’s, “Hey, you’re gonna provide something that I think I can profit off of more than the expense.”

Always remember that when you’re in these situations with clients.

There are a lot of great entrepreneurs out there, but entrepreneurs can also be some of the most narcissistic people you’ll ever meet, and they are more than happy to exploit you at every turn.

At the end of the day, don’t ever hang out in a scenario that is making you miserable. Even if you don’t feel like you can make up the income, I promise you, you can. Just plan out a little hustle, but don’t ever stay in a client relationship that’s running you into the ground.

Hopefully, that gives you some ideas about how to approach the different reasons you might want to break up with a client and gives you some confidence to make that break-up happen.

Alright guys, I’ll catch you in the next one.