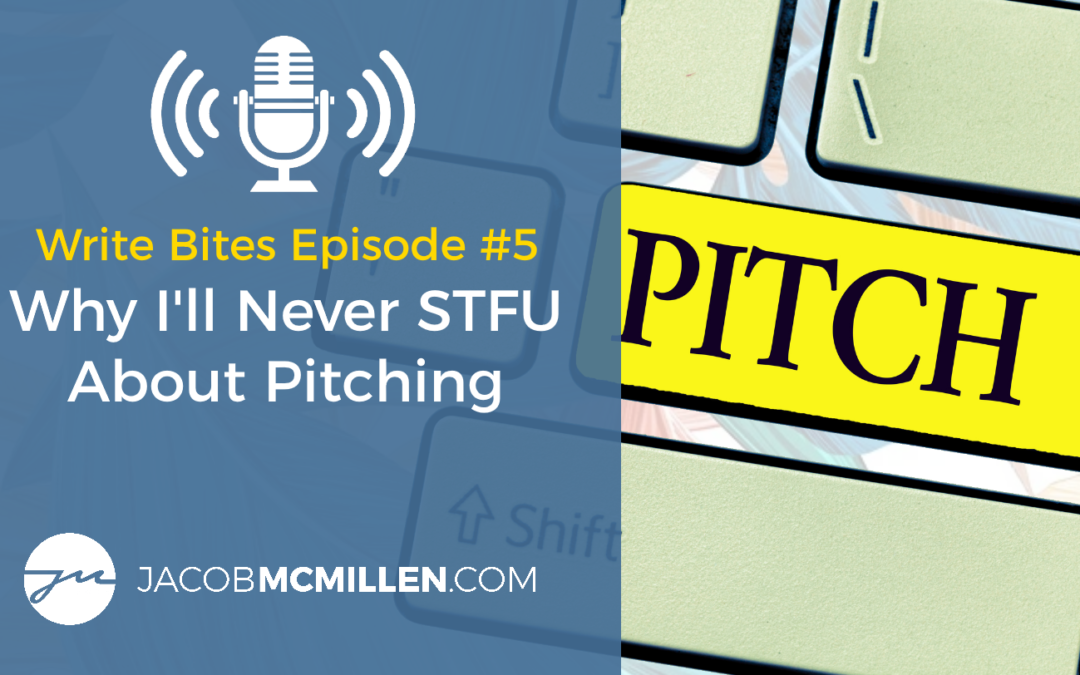 In Episode #5, I answer the question, “Why won’t you just shut the f**k up about pitching already?”

Hi guys. Welcome to Write Bites, an audio series where we discuss writing, marketing, and freelancing during one of my daily walks around the neighborhood.

Today, I wanted to answer the question that you’re never going to ask me, but you’re all thinking, which is, “Why won’t this dude just shut the fuck up about pitching already?”

It’s a fair question, because if you’ve talked to me, read any of my stuff, or are on my email list, you’re probably tired of hearing about pitching.

Since you’re tired of hearing about it, I want to talk to you more about it.

Because once you understand what pitching really can do for your life, you’re going to be just as much of an evangelist as I am.

You might think it’s funny because, to be honest, I don’t do a whole lot of pitching anymore. So why am I always thinking about it? Why am I always telling you about it?

That’s what I want to explain.

But that could not be further from the reality of what I’m trying to teach you here.

And I do not mean that metaphorically.

If you were following on my list literally just last month, I had someone do a challenge on Twitter where they said, “You need to make $5k over the next 48 hours. What do you do? You can’t use an email, you can’t use any existing audience,” and here’s what I said:

“That’s the same thing I teach you guys. I’d go pitch 10 marketing blogs and offer them a package of four blog posts for $5k.”

That second part is more specific to me and my niche; that’s not actually the price points I’m teaching you, but I am teaching you to “Go send 20 pitches.” For me, I thought I could do it in 10.

So guess what I did?

I went out and actually did the goddamn challenge. I pitched 10 marketing blogs and 47 hours and 30 minutes later, I had $5k deposited in my inbox for four writing gigs, which I then obviously still had to fulfill after the fact. I didn’t write them all in 48 hours, but that should illustrate to you how powerful this concept is. You can literally snap your fingers and create $5k out of thin air.

Obviously that’s a little bit of exaggeration because you’re taking advantage of previous things you’ve done and that’s why the further you go into your career, the more effective pitching will be, the more assurance you’ll have that when you tap your network or even go out and pitch random people that you’ll have more results to show.

It’s going to get better and better as you go. But even right now, you want to make $2k per month right now? Go pitch 20 pitches a week for the next three months: you will be making $2k minimum in freelancing income.

That is as close to a guarantee as I will ever make in this business. And that’s the power of pitching; it’s a guarantee.

That’s what I’m trying to teach when I talk about the numbers game. It’s unpredictably predictable. You know that with enough volume, you remove chance.

When we talk about statistics, the higher the sample size, the more you remove chance. If you know how to pitch and you’re willing to play the numbers game, you can literally guarantee yourself gigs. You can guarantee yourself income. This is why it’s so powerful.

I’ve been in the marketing and writing space for over 8 years, but over the last two to three years, I’ve been experimenting outside of strictly freelancing. I’ve done a little bit of stuff with affiliate sales, and I’ve built a content marketing agency up to about $40k per month. And then last July, I literally cut off everything else I was doing—went from making about probably about $25k net profit a month to zero overnight—to go try to build this training business of creating a course, launching Write Minds, doing this other stuff, which is the part of my business that I always wanted to do as soon as I felt that I had a really compelling vision and plan for how to really help writers succeed.

But the reason that I was not worried about going from $25k per month to zero, was because I knew that if it didn’t work out—if I failed, if I just couldn’t pull it off—that I could snap my fingers and be back doing freelance gigs and making as much money as I needed. And I ended up seeing that firsthand, because when the coronavirus hit in March, you were probably hearing me talk about how reliable freelancing is in a downturn. But I wasn’t really freelancing at the time; I had just finally finished my course, was working on that side of things, and to be honest, I got a little spooked with that.

I didn’t have nearly the same confidence in where that (COVID-19) was going to go as I did with the freelance side of things, so I started accepting freelance gigs again. I started sending out a few pitches to people who I thought, Hey, I can get some work here, and virtually overnight, I was back to $15k per month in freelancing gigs from maybe… I think the most I had done in the previous nine months was maybe like $2-3k worth of freelancing in a month.

But so can you! So do many other writers who have been in the space for several years. The difference is between some people who really take a hit when stuff happens or things don’t go their way is they haven’t built that mindset of “Hey, if something goes wrong, all I gotta do is go pitch and I’m good to go.” It’s incredibly assuring in a business where there are definitely some ups and downs. Freelancing—especially early on—can be a rollercoaster.

When you get to my point, where you’ve been in five plus years, you can still take some hits. It’s still a career that can have ups and downs. There’s risk involved. So, having that assurance of, “Hey, if I need money, I can go get money,” is not just powerful from the income, it’s also powerful from the element of the peace of mind.

The first time I really was ever forced into a bind when it came to pitching was early on and when I was still part-time freelancing, and I got canned by my biggest client a couple months before my wedding, which I was fully paying for. All of a sudden, my main source of income is gone, and I got a bunch of bills that I gotta a hit. But I knew even then that all I had to do was just go hustle off some pitches and I’d be good to go.

I saw then, in that first period of the rubber meeting the road that I was right. Pitching is reliable. You do enough work, you can make the money.

That stayed with me and has been confirmed and again and again over the course of my career, and you can experience the exact same thing. The pitches I was sending back then? Fuckin’ shit. Nowhere near the pitches that I can send now, that I sent over the last couple of months. Early on, they were trash. And I had no results to show. And still, with enough pitches, I was able to get the gigs.

And again, every part of that is transferable to you. Once you get it, you have full control over your income. That’s why I talk about it so much. Because it’s such a powerful thing.

Virtually, no one outside of people who are born insanely rich and secure could go lose five million and be fine. Outside of those people, very few people in this world have that level of income assurance, have that level of confidence that they’re going to be good to go even if they take some hits.

Obviously, who wouldn’t want that? You can have it. You’ve just got to actually go do the pitches and see for yourself for it to absolutely change your life.

And that’s why I will never shut the fuck up about pitching.

Alright, that’s all I got for you. I’ll catch you guys later.