Write Bites Episode #27: Why The Holidays Can Mean BIG Money For Freelance Writers 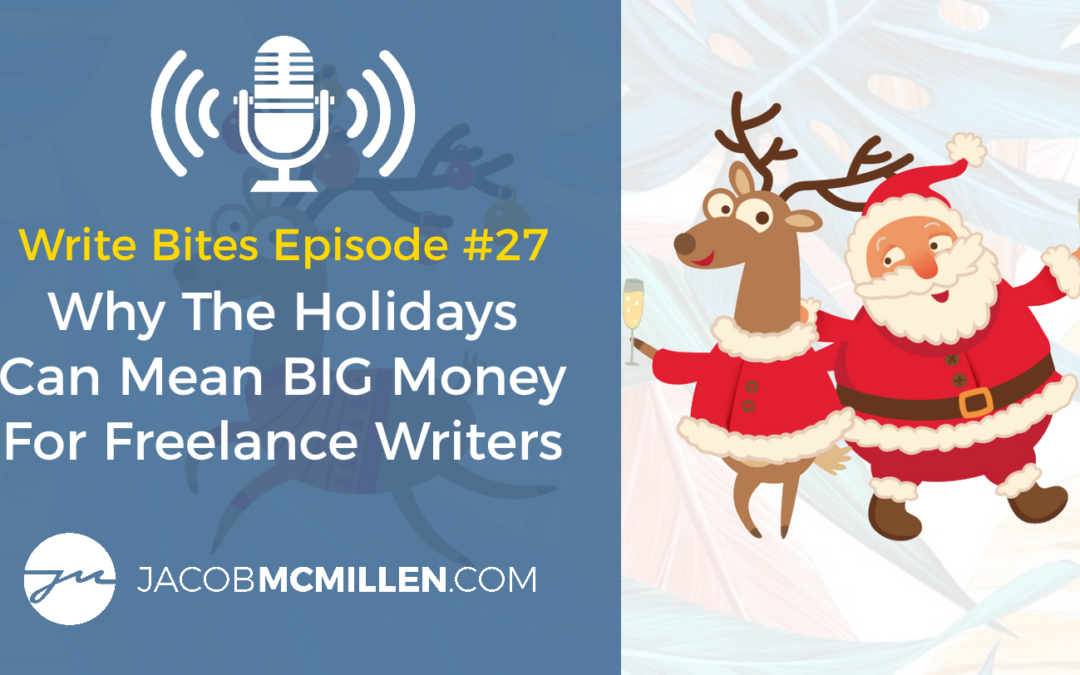 A lot of freelancers seem to think that November and December aren’t great months to land new clients.

In my career, December & January were always my two biggest months of the year, and the work to make that happened started in November.

If you want to leverage the holiday season to make this quarter your best yet, listen to today’s Write Bites episode or read the transcript below.

Read The Transcript: Why The Holidays Can Mean BIG Money For Freelance Writers

Hey guys! Welcome to Write Bites, a series of 10 minute episodes on writing, marketing, and freelancing.

In this episode, I want to talk with you about the upcoming holiday season and what you should expect as a freelance writer. We’re going to talk about how you should approach this next two months, what your expectations should be, and how the next two months could potentially set you up for the best year yet in your career in 2021. So let’s dive in.

Now, when a lot of people think about the holiday season, they envision people being out of the office, gone for holidays, phoning it in–a work version of senioritis. I get a lot of people emailing me and asking me, “are people even going to respond to me when I’m pitching over the next few months?”

In my experience, the holiday season is actually the best time of year to close new business. When I look back over my eight year career, historically December and January have been the two most lucrative months year in and year out. Both in terms of closing, raw numbers, but also in terms of contracts closed that extend through a good chunk of the year.

The reason for this and the mentality that I want to shift you into as you view the holiday season as a freelancer, solopreneur, or service provider, this is the time of year that people who did not have a great 2020 are reevaluating their strategies heading into the new year.

So, people where things may be stagnated or started declining, which is a huge chunk of businesses, they’re looking at this time of year. They’re really coming face to face with the idea that, “hey, what I did this last year is not going to work, and I need to take a new approach heading into 2021.”

Now, assuming the answer to that is not, “hey, we’re changing our product line” or “I’m scrapping this business and starting a new business,” which regardless of whether or not that should be what they’re doing, most business owners are going to hold onto their babies. They see what they’re currently doing as their child and aren’t going to want to change it.

So what that means for the vast majority of business owners is they need to change their marketing. Either they need to invest in new marketing channels or they need to switch up their marketing providers–the people who they’re currently working with. Maybe they have full-time hires that just aren’t working out and they are like, “okay, I’m going to scrap this and put the money into an agency or a freelancer.” Maybe they’re already working with freelancers or agencies that haven’t been working out, so they switched them.

Now this doesn’t just apply to failing businesses. This is just as true for successful businesses, businesses that have been kicking ass this last year, heading into the new year. they’re looking to double down on what they’ve done. They’re looking at the next year and going “we did a really great job this last year and we want to keep the momentum going. We want to continue scaling.” And that means additional resources.

If it’s a company that primarily relies on full-time hires, given the uncertain economic position we’re in, they might look to supplement the full-time hires with freelancers that don’t quite have as much risk associated with them as doing even more full-time hires.

As we’ve talked about before, times of recession and economic uncertainty are when freelancers really shine, because they represent a ton of value with almost no risk for businesses. So even those types of businesses might be considering adding freelancers to what they’re doing.

Other businesses, obviously they already have a stable of freelancers that they’re utilizing in their marketing will very likely continue adding more and more. And additionally, companies that have been working with agencies that have been getting them great results are going to be looking around this time of year to extend their contracts and add more to their budgets.

So that sends a bunch of these successful agencies scrambling to fill a higher work demand. So if you’re working with agencies that are passing off overflow work to you, or if you’ve been wanting to find those agencies, which isn’t particularly a great strategy on the earlier side of your career. It’s not a long-term solution, but if you’re still looking for your first clients or for some stable recurring clients, then now’s a great chance to start getting in front of some of those agencies.

All that to say, on both ends of the spectrum, failure and stagnation to growth, this is the time of year where people are making decisions. They’re evaluating things, they’re writing their reports. So now is when you want to be on the attack more than ever. And that’s not going to apply to every single business. You’re definitely going to run into a percentage of businesses where a lot of the employees are phoning it in or have tapped out…you’re going to be the last priority until the new year.

That’s not to say that every business is going to be in let’s-make-a-move-mode. But enough of them are. Again, sales has always been a numbers game. Pitching freelance clients has always been a numbers game. And so there are enough people in decision mode now that the numbers are going to work out in your favor in the vast majority of niches with the large percentage of business sizes that you might be going at. When we start to get into really big businesses with tons of staff, multiple levels of decision-making, that’s when you run the biggest risk of finding companies that are sort of gone until January.

But places where you have a smaller marketing department, where you have a business owner, that’s making marketing decisions, these people never truly are off. They never take full time off. They’re always thinking about the business. They’re always thinking about their responsibilities. And at no time, is that more true than this turn of the year.

So how do you take advantage of that? The big thing as you have, of course [sarcastic] never heard me mentioned before is pitching. Getting yourself out in front of these clients–in front of these potential leads. The more pitching you can do the better. And if there’s ever a time where you might want to do more of a warm pitching strategy where you want to get in front of some people you were too scared to pitch before, spend a bit more time doing some really hyper-personalized pitches towards brands that you follow. Maybe some dream clients–those types of people.

I would say between now, and the end of January is your most optimal window for getting some great pitching results. Pitching works every month of the year. But it’s especially effective during this next quarter here.

Anyway, I hope you found that helpful. If you have any questions, let me know in the comments.

I’d love to hear what your experience is. If you’re someone who’s been freelancing for a few years now, what has your experience been in the November, December, January time of year? Is it similar to mine where it’s been a very high income season? Or has it been slow for you? When you let me know, mention what niche you’re in, because it can definitely vary from niche to niche. But I’d love to hear more, and I will catch you guys in the next episode.