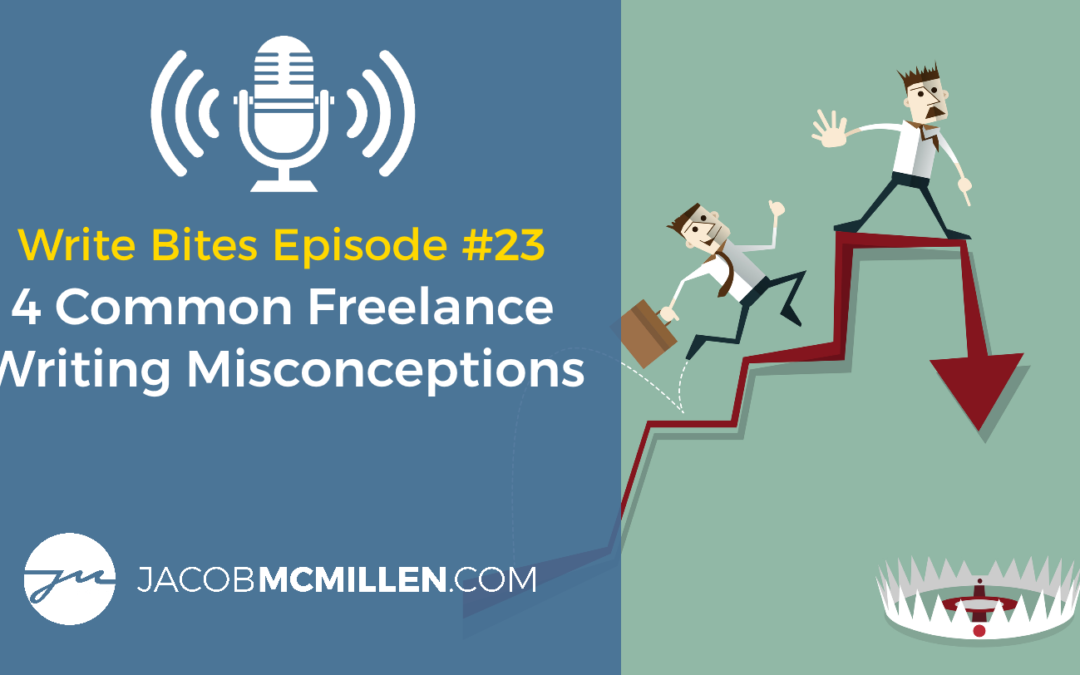 In Episode #23, I break down four common misconceptions that a lot of writers bring into freelancing.

Hey guys, and welcome to Write Bites, an audio series where we discuss writing, marketing and freelancing during one of my daily walks around the neighborhood.

So in this episode, I want to talk about common misconceptions that writers bring into freelancing. And these are not exclusive to beginners. I’ve actually found that a lot of times the mistakes that people bring in initially… oftentimes they don’t actually figure out the reality on their own, even after years in the field. You do tend to learn and overcome some of these misconceptions over time. But that said, whether you’re a beginner, aspiring, or have been freelancing for several years, you might still have one of these misconceptions. So let’s dive in.

In the eight years I’ve been doing this, I’ve never once had someone ask me where I went to college or what my degree was in. And it has never once come up in the process of closing a client. No one ever has asked me if I have copywriting credentials or this, that, and the other. It just doesn’t happen because the reality is, people really only care about, “can you solve my problem? Can you do the writing that I need?” And so if you can do that, if you can either demonstrate that you’ve done it with one other person, or if you can create an “in” for yourself in terms of doing an initial low investment test project for a client before they commit to the bigger gig, that’s your ticket in. it’s not your background, it’s not your experience. It’s not even really your portfolio. Your ticket in is good work. So that’s number one.

Number two is that business owners are comparing you and your credentials against a bunch of other copywriters. There’s this idea that any time a business owner goes out and hires a freelance writer, they’re going through this lengthy due diligence process of comparing them against a bunch of other similar copywriters and picking the one they like best. That’s not to say that that never happens. But the reality is if, against what I teach, you’re spending most of your time on job boards and third party platforms like Upwork / Fiverr, you are going to be actively competing against a lot of other copywriters, and they probably are comparing you. But if you’re going out and pitching businesses directly, that’s not what’s happening. And a lot of times people who even go and seek out copywriters on their own, [for them] it’s not a matter of finding ten different ones. It’s more like one, maybe two going, “hey, who do we know that does copywriting? Let’s get them in and see if they’ll work.” It’s pretty much that simple.

Just a few weeks ago, I had in the back of my mind been wanting to do some guest podcasting. For several months I was thinking, man, I really don’t want to do the outreach for guest podcasting. it’d be really nice to have like a booking agency. Then one day I get a pitch from someone pitching me on their podcast booking agency. It showed up in my inbox, and I was like, “oh shoot, this is exactly what I’ve been looking for!” I scheduled a call and 30 minutes later, I’m paying them a check for $5,000. They showed up offering me exactly what I was looking for. And the same is true with copywriting.

I didn’t go through, after I heard their pitch, and look up five other podcast booking agencies and compare and contrast. Why? Because that would have taken me a whole bunch of time! And I was already sold on this particular brand because I really liked their pitch. I thought the value they offered was great. And that’s all I needed to know. I just needed to know, can you deliver to me what I want? And if so, why would I waste all this time going through that same process with 10 other booking agencies. It’s a relatively straightforward service to offer, and the same is true with copywriting. It’s more about, “hey, we found you, either by referral or by connection, or because you pitched us and showed up right in front of us when we were looking for you. Let’s do it. And then if after you start doing the service for us, we realize, hey this isn’t a good fit, well then we won’t keep hiring you.”

Then moving on to number three. This one is one of my personal favorites just because I get so many emails about it– the idea that typos are a big deal. Here’s the best way I can describe this: a really good developmental editor, someone who can take a piece and help adjust the core content to make it a better piece, can charge upwards of 30 even 40, maybe sometimes even more, cents per word to do that type of work. Basically the same amount as a pretty solidly priced writer in most cases. A grammatical editor is charging around five cents per word. So just right there gives you a feel for what’s really important in a piece of content. It’s the core content. It’s the core messaging. It’s what you’re actually saying rather than whether you can dot the I’s and cross the T’s in terms of grammatical perfection. It’s very easy to bring in someone at a low cost to come in and fix grammar. It is not easy to bring someone in to come make the core content better.

That’s not to say that you shouldn’t be thinking about grammar or typos at all. And obviously when we’re talking about a first touch, sending out a pitch, getting in front of someone, you want to be pretty spot on with the grammar, just so you don’t give people an extra reason to say no to you. But in terms of writing content, you really don’t need to be paranoid about typos and grammar because it’s just not that important.

Just the other day I had someone catch a typo on one of my core sign up forms on my site. And this is the one that I basically copy-pasted for all the different locations on there. So I had that typo all across the site. I’ve had this up for at least a year, and I’ve had probably about 5,000-6,000 people sign up through this form that had a glaring typo on it. So it’s just like one of those things, like, as a writer, yes, you want to do a good job. But in terms of a freelancer and as a service provider, it’s a lot less of a deal than you probably think it is. And you really don’t need to be killing yourself over it. You also don’t need to be feeling like you provide this vastly higher value just because your work has a few less typos in it. Because it really doesn’t matter. So that is number three.

Number four…ooh, I like this one. So misconception number four. The idea that being mentored is going to teach you more than actually getting out and doing the work yourself. This is one of those things I have people ask me; to intern for me, to do free work for me in exchange for feedback on their work and mentoring. Things like that. I get this requested all the time. And I never accept it for one very critical reason, which is doing free work for a mentor.

Maybe when we’re talking about like one or two pieces; maybe getting mentor feedback on a single piece might be more valuable than doing a single piece for a client. But when we talk about 10 pieces, 20 pieces, you are going to get so much more value going out and pitching 20 and doing enough pitches to land 20 gigs, and then doing the writing for those 20 gigs. You’re going to learn so much more through that process, and you’re going to accelerate your business so much faster than if you just spent that time trying to get some successful writer to say yes to mentoring you and then did writing for them. You really don’t learn a whole lot from that, at least in addition to what you would learn working for a client.

And in fact, I would say you even learn less because in that scenario, you’re essentially ghostwriting for a mentor. And the process of ghostwriting for someone.and what they’re looking for is going to be a lot different than what an “end client” might be looking for. So it’s not to say that there’s no value ever. But usually when people think of internships, they’re thinking of a three month period, a six month period, Investing all this time and all this effort into something that you could literally be getting 10x the value from just starting your own business right now, and actually getting out and working with clients right now. That’s the misconception there.

Anyway, I hope that was helpful, and I will catch you guys in the next episode.