Write Bites Episode #16: How To Set Effective Goals As A Freelancer 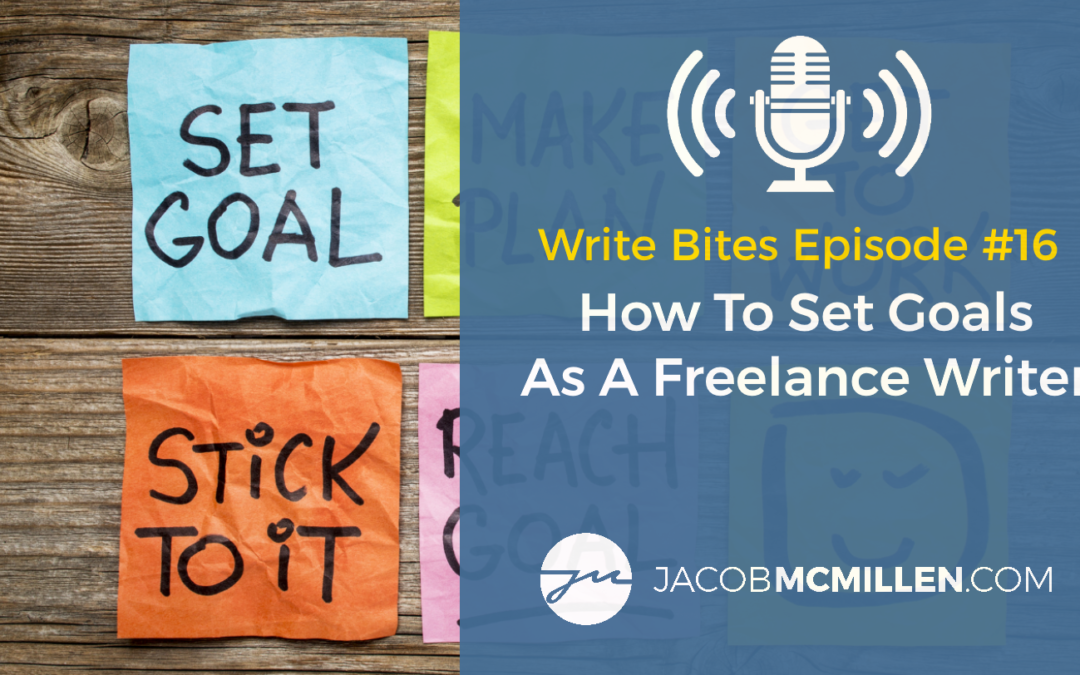 In Episode #16, I explain how to set effective goals as a freelancer in order to maximize your growth.

Written Transcript: How To Set Goals As A Freelancer

In this episode, I want to talk about goals. I want to discuss a little bit about how to set goals, how to meet your goals, and how to expand your goals over time.

So the first thing, and probably the most important thing with goals is specificity.

You need to be specific with the goals that you set. And that starts, first and foremost, with really understanding what it is that you actually want. I saw a Tweet the other day where someone said something along the lines of, “A lot of people default to assuming other people’s goals, because they’re not willing to do the work to figure out what their own goals are.”

I really resonate with that. It’s kind of in line with something that I’ve observed for a long time:

It seems like a lot of people default into what is generally looked at as successful within society, even when meeting goals that would make you theoretically successful aren’t actually going to make you happy—aren’t actually going to fulfill you.
And honestly, I can’t think of a more tragic thing than to spend your whole life working towards a certain goal only to realize once you get there, that it’s not what you actually wanted.

So, first and foremost, if you’re someone who is working towards something—maybe you’ve been working towards it for a while … maybe you’re just getting started—I would encourage you to, if you haven’t already, stop and really consider where is this leading? Is this the outcome, is this the day-to-day lifestyle that you want?

And this isn’t a static thing; you don’t just do this once. You should be re-evaluating this as time goes on and you get closer to your goals. As you start to meet certain thresholds along the way to the ultimate goal, you should be reevaluating, “Is this is actually what I want?”

So that’s first and foremost, and kind of continuing on that specificity, once you understand what you want as your longterm goal, then you need to get granular. You need to take the longterm goal—the macro goal—and turn it into milestones and specific micro goals along the way.

So for example, say you want to make $10,000 a month. If that’s your only goal, you’ll probably never hit it because it’s a big goal for most people. It’s an overwhelming goal, especially if you’re at a point where you’re making a hundred dollars a month. A hundred to $10,000 is a huge leap. And every moment you spend working towards that but not hitting it is going to feel like failure.

If you have a handful of goals along the way, you’re much more likely to be able to focus on a more attainable, shorter term goal. A goal that gets you closer to that $10,000 a month goal is psychologically going to be much more helpful and productive for you.

Plus, how do you even get $10,000 per month? if you don’t ever turn that into actionable steps and actionable goals that you can reach on the way there, it’s just a concept. It’s just a dream until you actually put together the detailed plan that includes goals along the way.

This leads us to the next point, which is, don’t set goals solely around things that aren’t a hundred percent in your control. To clarify what I mean, hitting $10,000 per month requires other factors outside your personal effort. Someone has to make the choice to pay you money and that’s fine. Your goals should incorporate variables beyond yourself, but it’s important to have specific goals within that, which are purely under your control.

For example, if you are setting up a pitching campaign, you shouldn’t purely have the goal of 10 sales per month. You should also have a goal of hitting a metric entirely under your control.

That’s why I preach 20 pitches a week, because it’s one hundred percent in your control.

As another example, my goal for my blog is to hit 100k visitors per month.
But that sort of goal isn’t really going to motivate me. Waking up in the morning and thinking, “I want to hit a hundred thousand visitors a month,” doesn’t push me to do anything concrete. What pushes me to act is something more like, “I need to hit a hundred long form blog posts on my website.” That is entirely in my control. I can wake up in the morning thinking about that. I can wake up in the morning and immediately take action towards that. It doesn’t require anyone else. It doesn’t depend on any other variables except my own effort. Accordingly, it’s a very actionable goal.

Now let’s move on to how to evolve your goals over time. 75% of the people who I’ve worked with do a decent job of everything we’ve talked about up to now.

But when we talk about evolution of goals over time, I feel people really tend to miss it. The biggest thing I can say here is that you should meet your initial goals before you go for the next one.

I think this is really important, especially early in your career. I work with a lot of writers and a lot of marketers who change their goals really frequently. In some cases, it’s the right call. Changing course is never really a problem on it’s own. But if you can set a reasonable 1-2 year goal for yourself and then accomplish that goal, you are going to gain momentum and achieve a lot more than if you change your goals every year or several times a year.

I’ve found this to be incredibly true in my own life. The goals that really change your life are rarely accomplished in a single year. So if you can go through the process of identifying what you actually want and the goals you actually want to hit and the plans to get there, then it’s important to really follow through on that and meet those initial one, two, three year goals. Meet those first and THEN move on to the bigger goals, and you’ll find that you build a lot more momentum over time.

When you allow yourself to really follow through on something and really just prove to yourself that you can accomplish a notable objective, it allows you to set even more aggressive goals and gives you so much more confidence going into that next leg, going to that next level. Once you’ve set and met a difficult goal, it really empowers you to go after bigger and bigger goals. It really gives you confidence. It gives you more follow-through because you’ve already established for yourself that you can follow through.

If you’re in your first year or two of freelancing and you’ve set a reasonable goal like you want to hit the full-time income you had at your last job, break that goal into milestones. Break it into objectives that are purely based on your own effort. Then do the work to meet that goal rather than changing course because you absolutely CAN meet that goal.

It’s going to open up a world of possibilities for you.

That’s all I have to say on goals. I will catch you in the next episode.