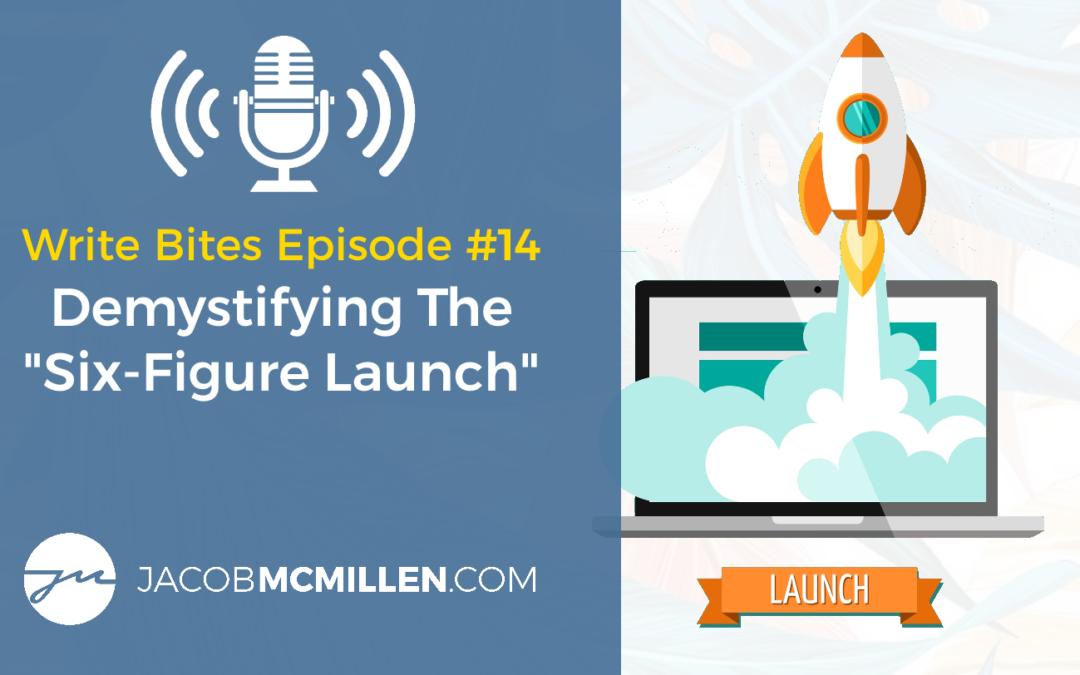 In Episode #14, I try to demystify the “six figure launch” and explain what it actually means.

Written Transcript: What “I Wrote A Six-Figure Launch” Actually Means

In this episode, I want to demystify something that gets passed around on these shared copywriting webs, where we see everyone talking about these really crazy results like, “Hey, I did a six-figure email sequence,” or “a seven-figure product launch.”

And I want to explain why it’s actually way less impressive than it sounds.

The purpose of this is not to detract from anyone sharing impressive-sounding results by any means. It’s not to take away from them and say, “They didn’t write great copy for that,” because they probably did.

Rather, what I want to do is explain it so that you, as someone who has not done a six- or seven-figure product launch, understand that there’s not this massive gulf of skill between you and the people sharing these results. It will make a little more sense as we dive in.

But essentially, it all kind of boils down to this: What ultimately determines how well a product sells is not copywriting, it’s product/market fit and it’s audience size.

If you have a huge audience and you’re selling something that has a great product/market fit for that audience, you’re going to sell a ton. It doesn’t matter if you have objectively shitty copywriting, unless the copywriting is just so unclear—unless the clarity is just to the point where people can’t even tell what’s going on, they can’t even understand the basics of the product/market fit—you’re going to sell a ton.

The copywriting can help increase the number of sales. It’s sort of like an election where everyone focuses on the swing-vote states because those are really the only votes that ultimately matter to what happens in the election. That’s a small percentage of votes that swing the election.

When you see someone who said, “Hey, I just did a six-figure launch. I’m a God,” what they really mean is they just worked with a business that had an audience capable of a six-figure launch and a product they were selling to that audience that was enough of a fit for a six-figure launch. In most cases, unless that thing just barely cleared $100K or whatever, that copywriter’s involvement was not necessary for it to be a six-figure launch. If you had something that made $200,000, I could have probably traded out the copywriter who did that with someone in their first or second year, and that launch still would have made $150k. That’s just basically how this works.

That’s why when I’m trying to educate people on copywriting, I’m mostly focused on clarity, even well above persuasion, because again, you’re just trying to make it clear what the product/market fit is rather than trying to persuade people to purchase it in the first place.

What should your takeaway from this be? The takeaway here is that if you want to have really impressive results from your clients, you need to be working with clients that have big audiences and have good product/market fit. Those are the types of clients where you’re going to be able to have these impressive case studies that are going to make you look like an absolute genius.

That’s great. I encourage you. When you get these clients and you have these impressive-sounding results, use the hell out of them. Absolutely.

But you don’t get those clients because you just became a copywriting God—figured out how to sell ice to an Eskimo—it’s going to be because you went and pitched a client that had a decent size audience, and you pitched a client that had good product/market fit. That’s the stuff you want to be looking for. That’s where you’re going to get these big, impressive numbers.

One of the absolute best tactics available to really make a name for yourself in the copywriting space is to target people who have big audiences but aren’t really utilizing those audiences. One of the first things that comes to mind here is podcasters.

Podcasters have got these massive audiences and most of them rely solely on ad revenue, which is just absolutely insane, because ad revenue, as every marketer who has ever lived in the internet age knows, is the absolute lowest efficiencies form of monetization. So, you go work with one of these podcasters who’s making $5k/month in ad revenue thinking, “Hey, I’m succeeding at podcasting.” Well, an audience that can support $5k per month in ad revenue can probably support a six-figure product launch if they were able to work out a product that the audience actually wanted.

Let’s say you go in and work with someone on turning their podcast to a subscription podcast instead of just a free one; have a Free layer and then have a Premium tier, and you’re looking at just potentially tens of thousands, hundreds of thousands—for some of these bigger podcasters—millions of dollars a year that they can be doing, because the podcasting industry is just so far behind in terms of monetization.

I’m not saying don’t develop your skills, I’m not saying the people who are getting these gigs aren’t very good copywriters, because in most cases, that’s absolutely what’s going on. But I’m just trying to demystify this whole concept and let you know that your ticket to these big impressive results is not becoming this mythical, vague, copywriting God. It’s literally just working with big audiences, and working on launches that have a good product/market fit, that’s it.

You can do it. If you can write clear copy, if you can write copy that checks the boxes on clarity, that can communicate the value, that can even incorporate just a little bit of persuasion, do it in a conversational tone—real simple stuff—you can absolutely be one of those people who said, “Hey, I did a six-figure launch.”

I hope that encourages you, and I will catch you in the next episode.