Write Bites Episode #12: Why Unhealthy Skepticism Will Derail Your Career 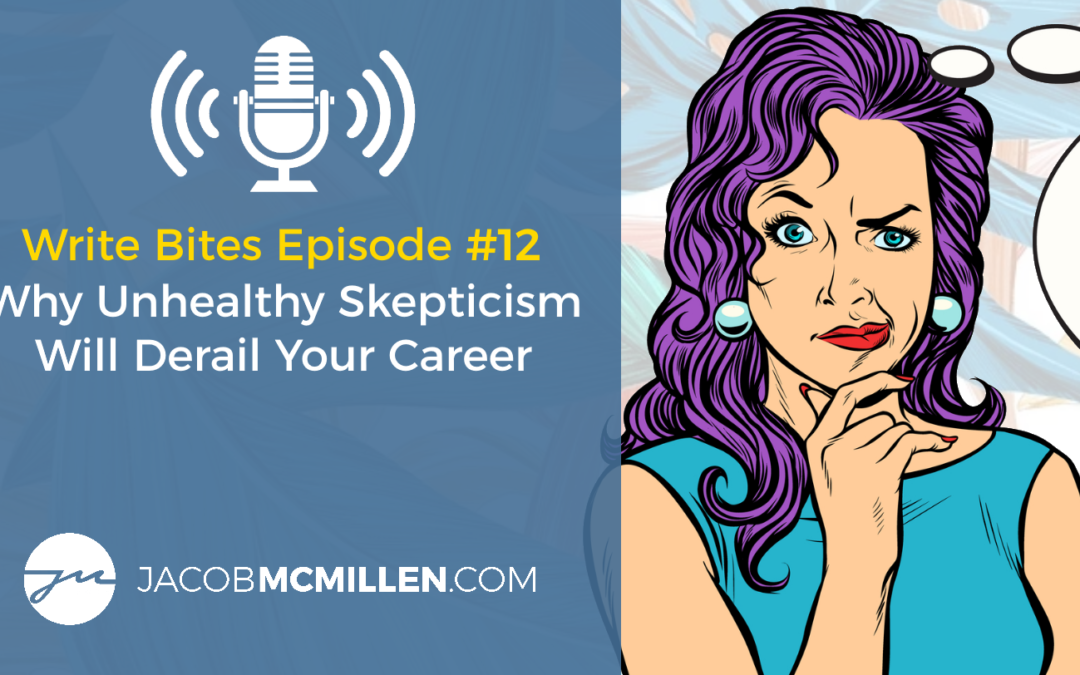 Transcript: Why Unhealthy Skepticism Will Derail Your Career

Hi guys. Welcome to Write Bites, an audio series where we discuss writing, marketing, and freelancing during one of my daily walks around the neighborhood.

In today’s episode, I want to talk about skepticism and why UN-healthy skepticism will fuck you up.

Now, there is absolutely such a thing as healthy skepticism, and as I’ve mentioned before, freelance writers are constantly at risk of being scammed. So, you 100% need a healthy dose of skepticism to be a freelance writer. So, I’m not talking about that.

Healthy skepticism, though, it’s not a passive thing, it’s an active thing. You have to do the work to do your due diligence and verify things. Skepticism without the work becomes unhealthy skepticism, and that’s what we’re going to address in this episode.

It ultimately manifests in two ways. Let’s use a pretty common scenario online:

So and so says, “Hey, I achieved this result and here is how I did it.”

There are two ways that skepticism comes into play here in a way that will really screw you up as a freelancer, a solo entrepreneur, anyone trying to build a business that’s achieving unusually good results.

The first one is, you look at the result and you just discount it:

And what you have to understand is this is your brain psychology at work. Your brain is seeing something that you have not achieved, and it’s feeling bad about that. Maybe it’s some sort of jealousy or envy, or it’s causing damage to your sense of self-worth in the sense like, “If they did that and I didn’t, unless I can come up with some sort of reason that feels better, I’m gonna interpret that as ‘I’m less talented,’ ‘I’m less ambitious,’” this, that, or the other.

Basically, you’re going to feel shitty if you can’t find a justification. And that’s an unhealthy way of looking at things. If you allow yourself to operate through that lens, your brain is going to provide that justification, which often takes the form of discounting the result.

I’m 100% in this boat, and honestly—to this day—it’s something I have to very actively suppress because I’m a very competitive person. When I see people achieving more than I’ve achieved, it hurts. If you’re someone who’s struggling to hit your first full-time income in freelance writing, you might look at me and think, “Oh hey, this guy is doing six figures. He’s doing better than pretty much everyone.”

In reality, I’m one of the most under-performing people in my network, or was for a long time, especially because I’m working in the marketing space. I’m working with a lot of entrepreneurs, and marketing heads and CEOs, most of whom are doing seven figures.

So, I deal with that exact same thing, it’s just kind of a maybe on a different scale. And it’s something I’ve had to learn…that if I allow myself to discount the result without doing the work, I immediately lose out on an opportunity to grow.

That’s what you need to understand. Sometimes you’re going to see people who are totally bullshitting. Liars are a dime-a-dozen in this game. But when you do see someone saying something, if your default is to just ignore it and discount it and allow your brain to play the justification game, then you’re going to miss out on opportunities to grow. So that’s the first area where skepticism can really fuck you up.

The second area is in the “How to,” as in, “Here’s how I achieved this result.”

What I see a lot is that people want to skip steps.

I just talked about how there’s a lot of people that are going to lie to you. When someone talks about a really impressive result and then gives a how-to that seems super easy and anyone could do it, that should suggest to you that it might be a scam because pretty much any method of achieving great results usually requires some significant effort. It requires you to do things most people won’t do, because if it didn’t it, everyone would be doing it.

Losing weight is simple. It’s not easy. It requires you to eat at a specific deficit every single day for months at a time. Very easy on a day-to-day basis, but very hard to do consistently over months. That’s why people would rather spend billions of dollars on supplements and fitness training and all these other things that get them zero results because they’re looking for shortcuts. They’re willing to pay for shortcuts. They’re willing to do anything but the actual process that works.

The same thing applies to business, to freelancing, to any business growth activity. The process for making it work is going to be simple…but not easy.

People are going to want to gravitate to what sounds easier, so when you see someone say, “Hey, here’s the result I got. Here’s the method I took,” if your immediate thought is, “How can I skip steps?”— it’s going to fuck you up. You’re not going to succeed.

And the thing you need to understand is, innovation is amazing. There is absolutely probably a better, potentially even, at the end of the day, easier way to do any given process. But the people who innovate end up doing way more work than the people who just follow the existing method. Because if you want to innovate, you need to do this process multiple times. You need to really understand every part of the process to find ways to make it more efficient—to find ways to improve it.

So if your mentality from the beginning is, “How can I skip steps?”

It’s going to fuck you up.

Rather, your mentality should be: “Hey, if someone’s willing to lay out, step for step, how they achieved this result that I want, why wouldn’t I go try those exact steps and see what happens?”

At the end of the day, the true solution to unhealthy skepticism is action…being a person who takes action…being a person who, when you see someone talk about a result that you want, your first instinct is to look into it and to act on it. You’re willing to lose a little time, and you’re willing to lose a little bit of money in the pursuit of taking action.

What I haven’t mentioned is I’ve also spent thousands and thousands more dollars on experimentation…on trying things…going out and trying different marketing methods to see, “Is this gonna work?” “Hey, so and so achieved this result. I want that result. Let me go try that.”

In the end, not all of them are going to work, and that’s like when I talked about in the scam article, I said at the end, I’ve been scammed in virtually every way that I listed in that thing, and I’m doing just fine because being an action-taker, being a risk-taker—a strategic risk-taker who does his due diligence—results in a net positive. At the end of the day, you come out on top. The incidental, the incremental places where it doesn’t work out are really just a business expense.

I hope that I helped provide some clarity on that and I will see you in the next episode.