Write Bites Episode #10: Aren’t There Too Many Copywriters Already? 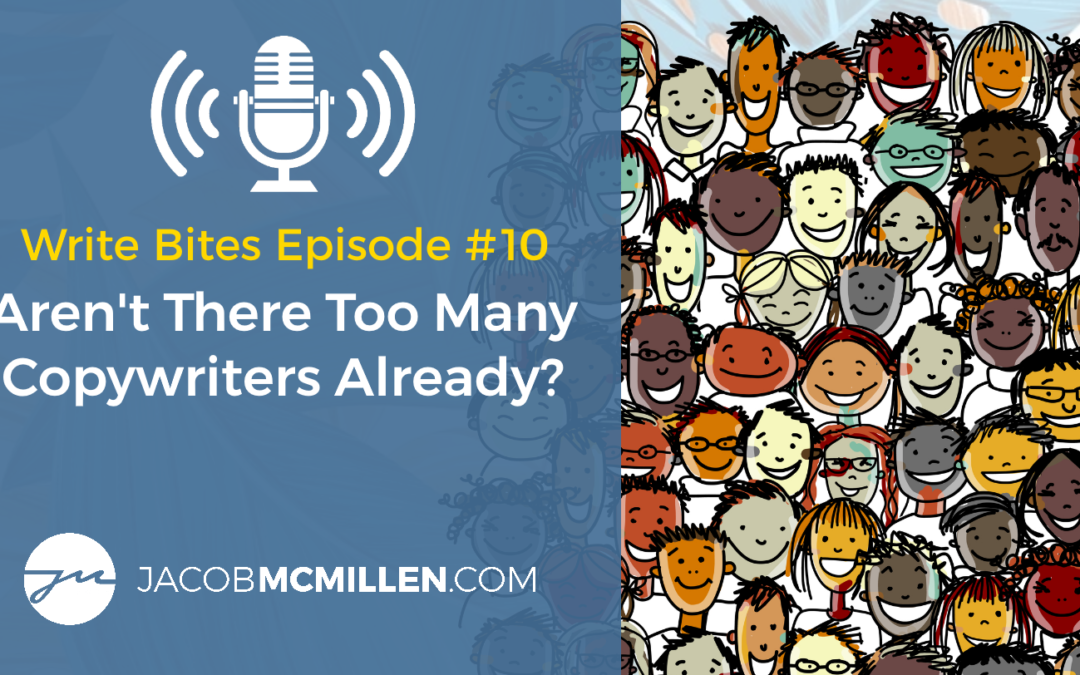 In Episode #10, I explain why market saturation is nearly always overblown, and why even an over-saturated market isn’t a true obstacle to your own personal success.

Transcript: Aren’t There Too Many Copywriters Already?

Hi guys. Welcome to Write Bites, an audio series, where we discuss marketing and freelancing during one of my daily walks around the neighborhood.

Today I want to answer the question, “Aren’t there too many copywriters already?”

And if you’re new to the field, if you’re an aspiring copywriter, this might be on your mind:

“Am I too late to the party?” “I see copy writers everywhere.” “I hop on LinkedIn and search copywriter or Google copywriter, and I see thousands and thousands of writers.”

Am I too late? Is the market already saturated?

I’m going to answer this in two ways.

First, we’re going to talk about what market saturation actually means, because it’s a very misunderstood concept, and it’s going to really affect any career or business decision you make throughout the rest of your life. I’d like to share a little something that I think will pay dividends for you, not just with this topic, but down the road as well.

Secondly, we’ll apply that to the copywriting landscape specifically and discuss:

To start, what we really need to begin with is supply and demand. If you’re not familiar with this concept, I will try to include a visual on this page, because it does help to visualize it. Essentially, you have demand, which is how many people want something and how much of it they want, you have supply, which is how many people are supplying that thing—creating, delivering that thing—and how much of it they’re creating.

And where those two things intercept, that’s kind of what dictates the price. The price will be determined to some extent via the manufacturing cost or the delivery cost, the true value of the product—the margins that are somewhat accepted within the field. But where the actual price falls isn’t super important here as much as how the changes in demand and supply are going to change it. And that’s really what we’re going to be discussing here.

What happens is new suppliers will typically enter the field to take advantage of the increased prices. As new suppliers come in, the supply goes up and that causes the price to go back down to kind of where it was before.

What also can happen is you get so many suppliers coming in—people who are a little late to the party—and that causes the rates to drop even lower; once the rates are below where they were before, certain suppliers won’t be able to last in that environment, so they’ll drop out, and again, the price kind of comes back to where it was originally.

That’s not typically a static thing. That’s an ongoing cycle that happens in virtually every field and industry. And we’re not talking about five people here, we’re talking about thousands and thousands, sometimes hundreds of thousands of people, millions of people, depending on how big the market is.

What this means for you—if you’re someone who’s worried about being too late to the party—is that regardless of what field you go into, there’s going to be a bunch of people at the lower level—“the dime-a-dozen people,” as one emailer or phrased it—and there’s going to be a smaller number of people who are average, and an even smaller number of people who are in the high-level/ exceptional category.

Whether you go into copywriting or whether you go into any other field, that reality is going to be true for you. You still have the chance of being in the lower level, the average level, or the high level, it’s just going to depend on where your skills are going to stack up next to the people in your field.

Even if you think, “Hey, the market is saturated,” saturation is a shifting scenario and ultimately it doesn’t matter a whole lot for any individual person, because where you fall on the bell curve of income is going to have much more to do with you and your own level of mastery and skill than it’s going to have to do with market forces.

So, that’s the first thing to keep in mind.

Tons and tons of new copywriters are seeing other people making money in this and going, “Shoot. Why wouldn’t I do that?”

When that’s the reality that people are enjoying, it’s going to attract a huge influx of supply. And where the supply falls relative to the demand is very hard to say. All I can tell you is that the demand for online copywriting, the explosion of online businesses, has not stopped.

We are still very much in that explosion and will be for some time, as far as I can tell. And even though we’ve seen, over maybe just the last five years, an explosion in freelance copywriters, from my personal view, we’re nowhere near close to even meeting the demand, let alone exceeding it.

But let’s say I’m wrong. Let’s say we’ve actually exceeded the demand and there are now more copywriters in the market than the market can actually handle and sustain.

What does that change for you personally? And the answer is: Nothing.

It really doesn’t change anything, because at the end of the day, you’re still going to need to get the exact same number of clients. A larger percentage of people having a copywriter that they’ve worked with does not prevent you from getting business, nor does it prevent you from developing your mastery, moving from a lower level to more average, from average to exceptional.

Half the pretty good freelancers I’ve tried to work with for more than a period of a month, were—within two to three months—outsourcing their work to other ghostwriters who were much worse than they were. The quality of the writing was just dropping off a cliff.

So, even if everyone has a freelancer, that doesn’t mean that they are completely happy with the work. There’s a lot of room for you to come in and do a better job.

That’s just presuming everyone has a copywriter. The reality is, they don’t. There are still a lot of businesses constantly coming into existence and looking for new copywriters as well as businesses that need copywriting, but they’ve just never gotten around to actually going to look for a copywriter.

In as big a market as this, the demand—for all intents and purposes—is virtually endless.

And no matter how many copywriters we have, if we get to the point of excessive over-saturation, that doesn’t mean there’s not room for you. Every single saturated market has new players constantly entering it and doing a better job than the existing companies. So, even if you’re looking around and going, “Hey, I have to compete,” you’re going to have to compete anywhere you go.

And that’s just a good thing to learn in general with saturation.

A saturated market is not an inaccessible market.

A saturated market, if anything, should just communicate to you that the demand is strong, that people are paying good money, and that’s caused a lot of suppliers to be attracted to the market.

Anyway, that about covers it. I hope you found that helpful and encouraging if this is a field you’re wanting to enter, but don’t feel you can compete.