Write Bites Episode #11: What Freelance Copywriters Should Know In A Pandemic-Driven Recession 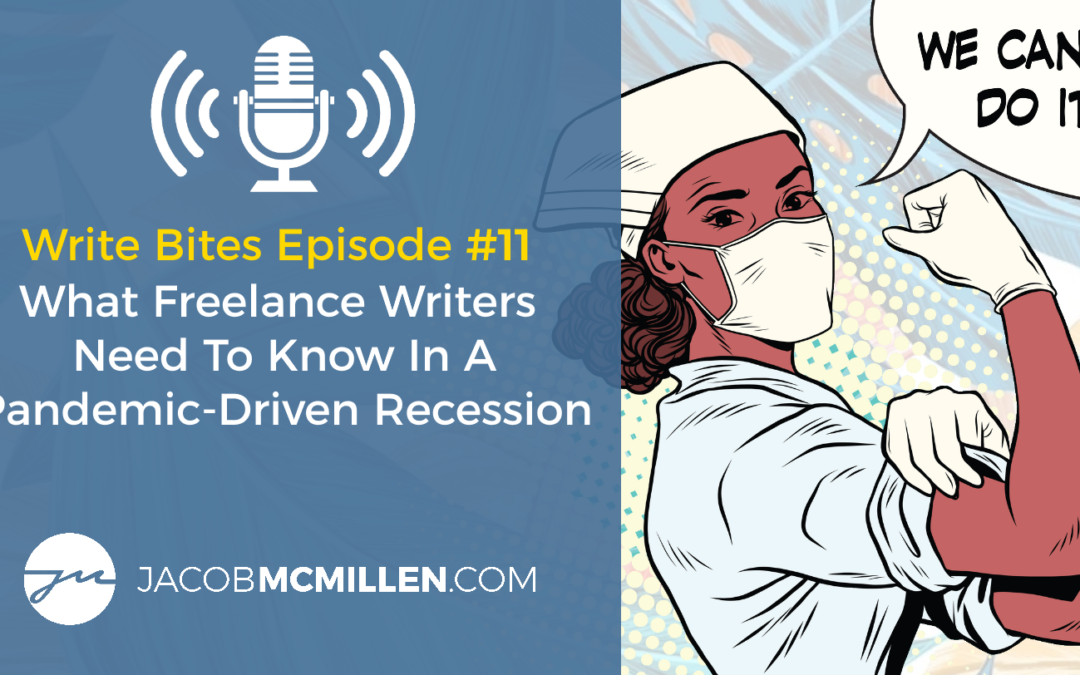 In Episode #12, I give my thoughts on navigating the pandemic as a freelance writer and what to anticipate if we head into a new pandemic-driven recession.

Transcript: What Freelance Copywriters Should Know In A Pandemic-Driven Recession

So today, I want to talk about the pandemic and initial/potential recession we’re looking at here and how it affects you as a freelancer. To begin, I want to look back at some of my predictions when this whole thing started, how it’s played out since, and then what I’m expecting moving forward including what you should be doing now and what you should be expecting.

Let’s backtrack a bit and talk about, “What did we see at the beginning?”

If you were on my email list, then I sent an email out and was basically just talking about how when the economy starts to decline, small businesses stop—for the most part—hiring freelancers, in general, but especially freelance writers. To some extent, we’re a little bit of an inelastic industry; were a somewhat recession-proof industry in the sense that people need writing, plain and simple. There’s no way around that.

I think no matter how bad things get, people are going to be hiring freelance writers. But when we talk about small businesses—when the economy’s down—they tend to be hiring fewer freelancers.

At the same time—and this is kind of what I was wanting to point out in my email to you guys—mid- to large-sized businesses actually will hire more freelancers, and the reason for this is because they stop making full-time hires and they start letting go of full-time employees.

When you stop making those hires—when you’re letting those employees go—the things that you needed them to do don’t just disappear. Maybe certain parts of their duties that were always a bit superfluous stop getting completed. But the essential pieces still have to get done, and the cheaper option in the short term—which, when the economy is down, that is the name of the game: cheaper in the short term—is to hire freelancers.

I’m going to tell you right now, there were companies hiring freelancers back in my early days that haven’t been hiring freelancers in five years, and within the next year or two, they’re going to start doing it again. Previously, they grew to the point that full-time hires made more sense. In the long-term, full-time/in-house is the better option. So it’s the cheaper, more efficient, higher upside option, a lot of the time. Not always, but a lot of the time.

Just in terms of my own business, and what I saw: I had stopped doing freelance work for several months while I was finishing out my course, which I completed in March.

With the pandemic happening, I was like, “Okay, who knows how selling, this thing is gonna work?

I’ve never sold products in a recession, so I’m gonna take whatever freelance work comes my way,” and literally within half a month, I was back up to $15k a month in freelancing gigs.

Do they do that in a non-recession year? I don’t know, because, like I said, I think those higher-end projects are more extensive when things start to go south or there’s more uncertainty.

Obviously, that’s arbitrary and super limited—just from my own lens and the people I’m talking with.

I sent you a testimonial the other week of another member. This guy, fully employed, only working 5-10 hours a week on trying to get his freelance business off the ground, made $500 bucks in March, I think it was…no, May. Then he’s up to $1000 in June. One weekend into July, he’d already closed $3500 for the month.

And I need to check back in to see how much he ended up clearing. I guess we’re still only a halfway point for this month.

But what I’m trying to say is there is a lot of opportunity here, especially if you’re willing to be confident and audacious enough to pitch the bigger fish.

Now, there’s another aspect to this as well. And this is where we start to veer into more prediction territory. Take this with a massive grain of salt; I am not an economics expert. I will say, I have always felt that the market has lagged behind the available information on this pandemic.

I put my money where my mouth was on this: I took literally my entire portfolio out of stocks, like a half week before the market crash. So I skipped that thing entirely, because I just felt like the market is not appreciating how damaging this is going to be to the global economy.

Doesn’t mean my prediction I’m about to tell you is going to be accurate, but just a little plug there that there’s a small chance I know what I’m talking about here. But I actually think we are in for a pretty extensive recession. I think, again, the market’s lagging behind, and it probably will for the next few months. I think we still are probably maybe another six-plus months out from really starting to see the ultimate decline, but I think we’re in for a pretty extensive recession here.

On the one hand, I actually think that’s good for freelancers, because I genuinely think freelancing is one of the most inelastic careers that you can have in the middle of a recession like this.

At the same time though, we are going to continue to see whole industries completely destroyed by this pandemic. People from those industries are going to be seeking alternatives, and I think freelance writing is a very attractive alternative. I have conversations with people on a weekly basis who lost their employment from the food service industry or from retail or some other close proximity industry that employs a shitload of people, and all these people are looking for alternatives.

The education is a lot higher now to where those people are turning to freelancing, freelance writing in particular. Freelance writing is somewhat unique in the sense that you don’t need a specific skill that most people don’t already have to start looking into it. A lot of people consider themselves to be good writers. It’s not like design where you need to go learn a certain type of design software or coding where you have to go learn how to code, and the average person doesn’t know how to do it. The average person knows how to write, so when they go, “Hey, I need employment; freelance writing is an option.” It’s very tempting.

I love that. I think that’s amazing.

What it also means for you is that if I’m right about this extended recession that we’re just flirting with the beginning of now, we are going to see a mountain of people seeking to get in this freelance writing game, unlike anything we’ve ever seen.

It’s going to be a tidal wave.

And if that’s the case—you’re sitting here listening to this and you’re sort of dipping your toes in the water:

No matter how much you feel like maybe you’ve missed the boat on this whole copywriting thing and there are too many people doing this already, it’s nothing compared to where we’ll be at six months to a year from now.

It’s only going to get more crowded from here.

As I’ve talked about in previous episodes, I genuinely feel that the demand is endless, so I’m not worried about that.

Even once we get into crazy saturation territory, there’s always room for people who can do things at a high level, who are willing to do what others are not willing to do to make a name for themselves. That said, keep in mind if this is something you’ve been flirting with, now is the time to get serious. Now is the time to really start attacking this thing, because it’s only going to get more crowded from here.

But if you’re willing to do that, I really can’t imagine a better job to have, a better career to have, a better business to run in an uncertain economy than to provide something that costs nothing for you to provide—no overhead service, one that you can offer from anywhere in the world—that every single business in the entire world needs.

To my mind, if you’re freelancing, I think you’re in a good spot. And if you’ve been thinking about it, now is a good time.

That’s all I got. Catch you guys in the next episode.