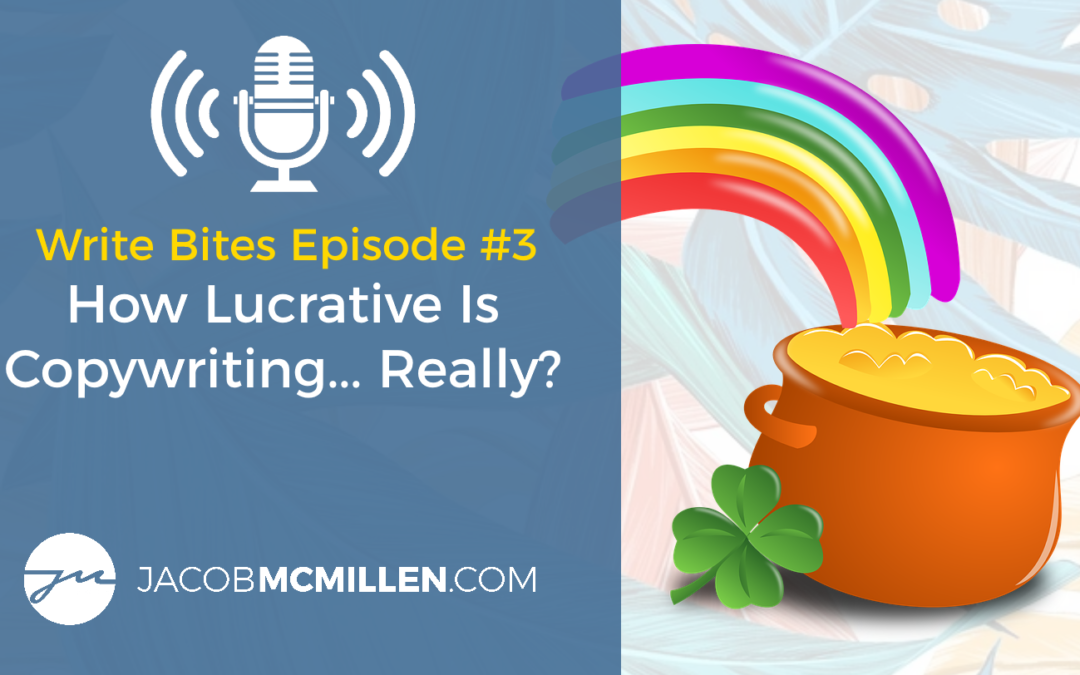 Is copywriting a high income skill?

The short answer is yes. In fact, it’s one of the most lucrative skills that a large percentage of people can reasonably aspire to learn.

Most high income skills require extensive training or unique talents to ever achieve.

Copywriting, on the other hand, is both incredibly lucrative AND incredibly accessible.

I dive into why and how in this episode.

Audio Recording: Why Copywriting Is THE Most Accessible High Income Skill

Written Transcript: Why Copywriting Is THE Most Accessible High Income Skill

Hey guys. Welcome to Write Bites, an audio series where we discuss writing, marketing, and freelancing during one of my daily walks around the neighborhood. It is a light 97 degrees here at 4 o’clock in the afternoon in Redding, California. So that’s fun.

And the question I want to answer today is, “How lucrative is copywriting…really?” And the way I’m going to phrase this for SEO purposes is probably, “Is copywriting a high-income skill?”

But the series of questions related to it:

And I want to preface this by saying, nothing that’s going to be said here is based on hard data; this is just based on my experience over eight years working with hundreds to thousands of other freelance writers.

Depending on how you want to gauge that metric, I have probably had about 10,000 subscribers come through my list, most of those in the last year. Every three months, we get about 100 applications to Write Minds and I get to see from a 100 different freelancers what they’re experiencing, how much money they’re making, how long they’ve been doing it—so I have a lot of first-hand experience in gauging what’s happening in the market across a broad spectrum of freelancers. That said, this is still my arbitrary take based on my own limited experience.

The first thing I want to address is, when we talk about copywriting, let’s start at the floor of copywriting, because a lot of people come into it and they question whether they can replace their current full-time income with freelance copywriting income.

Understandably, that’s usually the first thing they’re thinking about. And a lot of them think that just to accomplish that goal, they need to be some sort of unique special talent, or they think they need to stand out in the sea of thousands of copywriters. In their mind, it’s a very uphill battle. They’re contextualizing it against their own frame of reference, their own background, where you’re in a small environment within a limited pool and you can experience fairly fierce competition against a very small group of people.

So you come into the freelancing world, and you look out and you see thousands and thousands of other freelancers and you think, “Well, shit. If I was struggling to compete against a handful of people, how am I ever gonna get noticed in all this?”

What I want to explain to you here is that the freelance landscape is nothing like anything you’ve ever experienced before. If you have not been in freelancing in the past, there is virtually zero comparison between this world—this career path—and what you’ve known in the past. And in almost every case, that’s to your advantage.

To get to the specifics of that, in freelance copywriting, what makes it such a reliable career choice is that every single business on the planet needs copywriting. Every. Single. One. You want to make money online, you need copywriting; there are no ifs, ands, or buts about it. You may produce the copywriting yourself, someone on your team may do it—it doesn’t necessarily mean you’re going to have to choose a freelancer—but you need it.

Every business needs a website. There was a brief moment in time where some misguided souls were saying, “Oh hey. Just do it all through social.” But even that trend crashed and burned pretty quickly as a lot of these social channels started making major changes to their algorithms that completely screwed over anyone who was trying to build some sort of an organic presence. So if you want to succeed, you need a website. Every. Single. Business.

Beyond that, if you really want to succeed and if you’re actually destined to succeed, you’re very likely investing in email copywriting and blog content. With every year that passes, that just increases.

So when we’re looking across the spectrum of millions and millions of businesses, they all need copywriters. It doesn’t matter how many thousands of copywriters there are out there, the demand is bottomless.

That concept does not exist in virtually any other career path. It’s a new paradigm for a career.

That’s the first thing you have to understand: the demand is literally bottomless.

So, what it really comes down to is:

Really, pitching is the dictator of how much money you’ll make—of how lucrative copywriting will be for you.

Again, my eight years is limited experience, but I’ve worked with numerous copywriters who make several thousand dollars a month within their first six months, because when I say, “Go pitch,” they go fucking pitch.

Right now, after a bunch of filtering of my list, I have around 8,000 subscribers. When I send an email out to my subscribers and say, “Hey, pitch 20 times a week,” probably less than 100 actually go run with that. And maybe that’s you. Maybe you’re listening to this and you saw one of the many times I’ve sent it on an email and said, “Hey, send out your 20 pitches a week,” and you thought, “Okay, that sounds good,” but then you didn’t do it. And if that’s you, you can start doing that any time.

I’m going to tell you, the people who actually go do that, they’re making full-time income very, very quickly.

I work with people—and love these people—who have been doing copywriting for years and are still struggling to maintain a few grand a month. It’s not because they’re bad writers. Almost all of them are fantastic writers; that’s why they’re still sticking it out even after struggling. But the issue is they’ve never fully embraced getting out and pitching, even just 20 pitches a week.

So when we talk about the floor, for someone who is willing to go out and pitch and get in front of that volume of businesses, the floor is incredibly high. Full-time income—let’s say, $4,000 a month—is incredibly attainable. You could be a terrible writer—maybe that’s a slight exaggeration—you could be a weak writer and still make $4k a month if you’re pitching.

The pitching and the writing quality are two entirely separate things. A lot of people, when they hire you, it’s not based on your writing quality. I see writers all the time who can send me a fantastic portfolio because everything they’ve written has gone through an extremely solid editing process. And then when I work with them directly, they’re actually not nearly as good as their portfolio would suggest, but that’s okay. They can still make money, because even if I don’t rehire them, I hired them once, and there are a hundred other people willing to hire them once again. There’s a limitless number of businesses out there willing to hire you. So just by virtue of pitching and hustling, you can make a full-time income very reliably—very predictably—in this field.

Once you want to move beyond $4k a month, you need to start actually being good and taking advantage of repeat business. Then we hit $8k—if you’re actually good and you’re hustling on the pitching—we’re hitting $8k per month, pretty consistently…pretty reliably. I think that’s a completely attainable goal for most writers.

Again, moving past that, we get up to about the $15k per month mark. If you’re the type of person who is just pretty good at most things you do, is a highly competent person, you’re willing to take a little bit of risk, you’re willing to push yourself, get out of your comfort zone fairly consistently… I know a lot of great writers operating at around the $15k per month level. Now we’re getting into that top 10%—maybe even a little past that range—of writers.

At that kind of price point, you can hang out there without really being overworked. I stopped freelancing for nine months to put together my course, and then when COVID hit, I got a little bit spooked with how that was going affect my training sales, so I started saying yes to freelancing again. I was back to $15k per month, almost overnight.

Once you’re at that price point, it’s a very reliable price point to be at.

Past that is when we start to get beyond the scope of freelancing. You’re needing to start doing more consulting, more affiliate sales, more this, that or the other, evolving your business in various ways.

If you can hit $15k per month, last time I checked, that was at least top 5% income—it might even have been higher than that. But when we talk about pure yearly income, we’re talking about a very high percentile there.

So to me, when I look at those price points—and that’s measured across a lot of different people that I’ve seen with various skillsets…these aren’t all identical people—then I think it’s pretty conclusive that copywriting is a high income skill; it’s a lucrative skill; it’s a reliable skill.

One student of mine—already become a good friend—is a real estate investor. He’s using copywriting to create cash flow to invest in his much more high-wealth, highly scalable business of real estate investing. So the ceiling is virtually endless in that capacity, but again, that takes it beyond the scope of freelancing.

Anyway, I hope that sheds some light on things with regard to the question, “How lucrative is copywriting?” I’ll catch ya later.